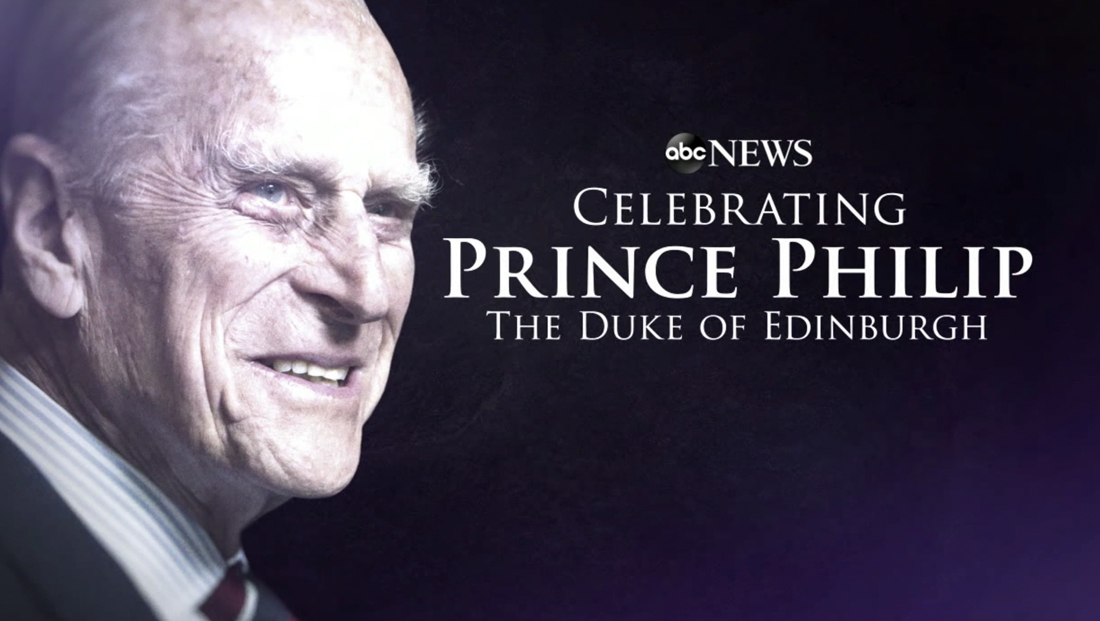 The pared down funeral of Price Philip, the late husband of sitting Queen Elizabeth II, received worldwide coverage, including in the U.S. — though it wasn’t as prominently featured as other recent U.K. events such as Meghan Markle and Prince Harry’s wedding.

ABC News had David Muir anchoring from Studio TV3 in New York in front of a video wall backdrop similar to the one used on “World News Tonight” but featuring Philip themed imagery and its “Celebrating Price Philip” branding camera right. s

Overall, the coverage used a deep blue, almost violet shade with the Trajan font for its title. Other video panels in TV3 features photo collages of Philip along with Union Jack themed graphics.

ABC used a cold open with a female British announcer.

NBC News and MSNBC’s coverage included a regal opening with imagery of Philip with animated “points” moving into place that eventually formed the Union Jack next to a glimmering gold title “Remembering Price Philip.”

“Today” co-anchors Savannah Guthrie and Hoda Kotb anchored coverage from Studio 1A using a desk often used by MSNBC, seated in front of a video wall image of Windsor Castle with a band of its coverage branding running behind.

MSNBC used the same open and had Alex Witt and Katy Tur anchoring from the vista wall alcove in the studio normally used for “NBC Nightly News.” The video walls were also used to showcase a view of Windsor.

MSNBC also used videos of the “news” video wall on the opposite side of the studio, which a dramatic blue lighting design.

The two networks also both used a deep blue and gold look, including a “frame” created using thin gold elements.

CNN opted for a lighter blue, gold and white look that used a more distinct serif typeface under the name “The Royal Funeral of Price Philip.”

Its open used an instrumental of Thaddeus Cork’s “Honor Within” and featured Anderson Cooper anchoring from in front of a video wall view of Windsor.

CNN added a banner along the bottom of the screen — a space normally devoted to the ticker — similar to the approach NBC uses for special coverage.

On Fox’s right leaning cable network, Martha MacCallum headed up coverage from in front of a video feed of Windsor, accompanied by the network’s usual black, white and gold look used when celebrities and people of note die. The lower third banners were also turned black and the video walls and movable ribbon in Studio J in New York were also used to showcase Philip’s life.

With Philip’s death hitting closer to home, BBC offered up a somber open that was, at least on the BBC World News feed, awkwardly interrupted by what was apparently an open mic with someone saying “well … done.”

As one might expect, the British based network titled its coverage with Philip’s full styling: “HRH (His Royal Highness) The Price Phillip, Duke of Edinburgh” along with his dates.

Coverage appeared to be anchored from indoors, also in front of a video wall showcasing Windsor.

In fact, none of the major U.S. networks anchored coverage from Windsor — instead using their normal studios with video feeds of the castle and town shown on video walls, though they did have live on the ground coverage.

Much of this could be attributed to coronavirus travel restrictions and precautions. The funeral itself was pared down to just 30 attendees and featured socially distanced musical performances as well as the queen sitting alone.

Philip, who was never in line for the British monarchy because he was born a prince of Greece and Denmark (hence him not having the title “king” despite having been married to the queen) isn’t as well known to most Americans either, so it’s also likely that led to at least some of the decisions to offered scaled back coverage in America.