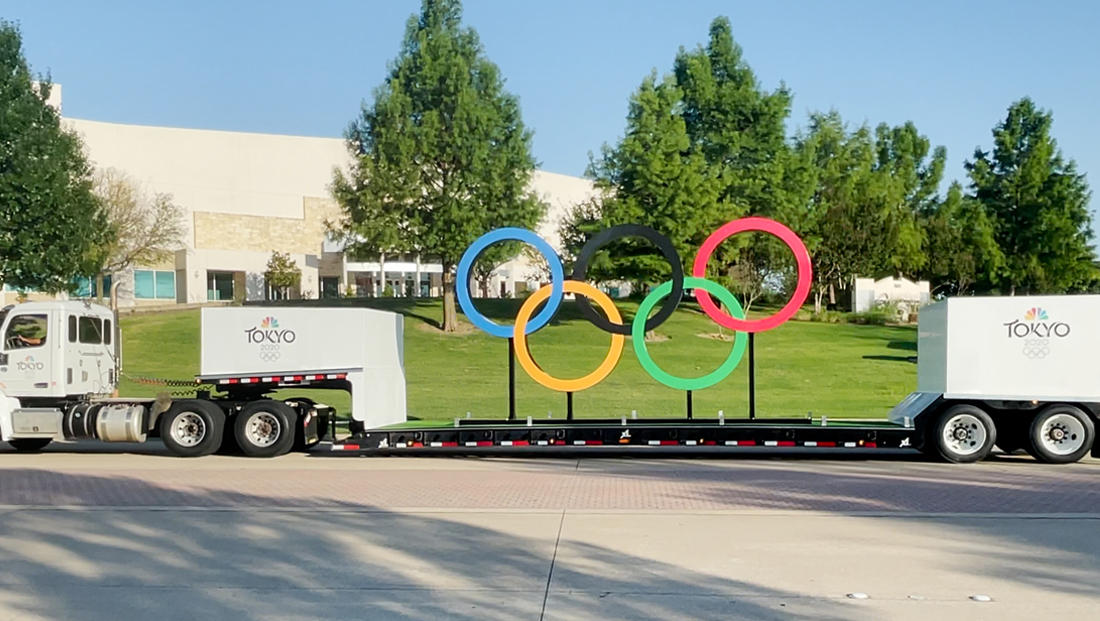 NBC Sports will be driving a giant version of the Olympic rings logo across the country as part of a promotional effort ahead of its coverage of the delayed 2020 Olympics in Tokyo.

Dubbed the “Rings Across America” tour, the network is using an open flatbed truck to carry a 13-foot tall dimensional version of the six Olympic rings that will stop in six locations across the U.S. giving the public a chance to stop by and view the “interactive” exhibit up close and personal:

All of these cities, with the exception of Orlando, have an NBC owned station in them (Orlando’s NBC affiliate WESH is owned by Hearst), and there will likely be heavy cross promotion.

In addition to the stops, the rings will be visible as it transverses 8,000 miles of roadways over 125 hours of drive time traveling through 23 states.

NBC is presumably hoping that the rings will attract attention on social media, including with visitors posting selfies and photos from in front of it.

The idea is similar to many installations a popular tourist locations where visitors can snap photos that, in turn, help showcase the locale. In some of these iterations, a portion of the word or logo is purposefully left out so that a person can stand there to “become” part of the installation. For example, an “I” might be left out so a person standing there takes on both the geometric form and dictionary definition of the letter; other letters include ones that a human figure can easily create using their limbs in the spirit of the “YMCA” dance move.

That said, the Olympic rings don’t have as obvious feature that would let visitors interact with it — and any photos would need to be taken from a decent distance away to read as the logo.

Imagine driving down the highway and seeing THIS.

The Olympic Rings are headed across America as we head toward the July 23 #TokyoOlympics Opening Ceremony.

Starting next week, get your photo with the Rings on stops in Chicago, Orlando, Miami, Washington D.C. and New York! pic.twitter.com/AxL80tAwRz

As part of its “Summer Games” branding designed to encompass the Olympics and a slate of competition programming, NBC created three “screening series” events in Los Angeles, Chicago and Miami.

L.A. and Chicago’s happened in June, but the Miami event, slated for July 13, 2021, will also serve as the host location for “Rings Across America.”

The five interlocking rings were created in 1913 by Pierre de Coubertin, the founder of the International Olympic Committee. At the time, the USFSA, an organization responsible for representing France in the IOC used two interlocking rings side by side, a design originally attributed to Carl Jung as symbolizing continuity and the human being.

Each ring of the five ring design was reportedly meant to represents the five “continents” of Europe, Africa, Asia, the Americas and Oceania, though this idea has since been disclaimed by the IOC, which notes Coubertin may have come up with the notion in hindsight.

There’s also a myth that the design was used in the ancient Olympics, thanks to a stone carving featuring the symbol in Greece that was mistaken for being much older than it was.

The IOC maintains strict control over the rings, with only official sponsors and media partners permitted to use it in any official capacity and there have been multiple legal battles over what the IOC alleged as unauthorized use of the design.

In America, NBC, which has secured the U.S. broadcast rights for all Olympics stretching into 2032, has long incorporated the rings into its on air logos and bugs in the period leading up to and during the games, including on non-sports broadcasts.