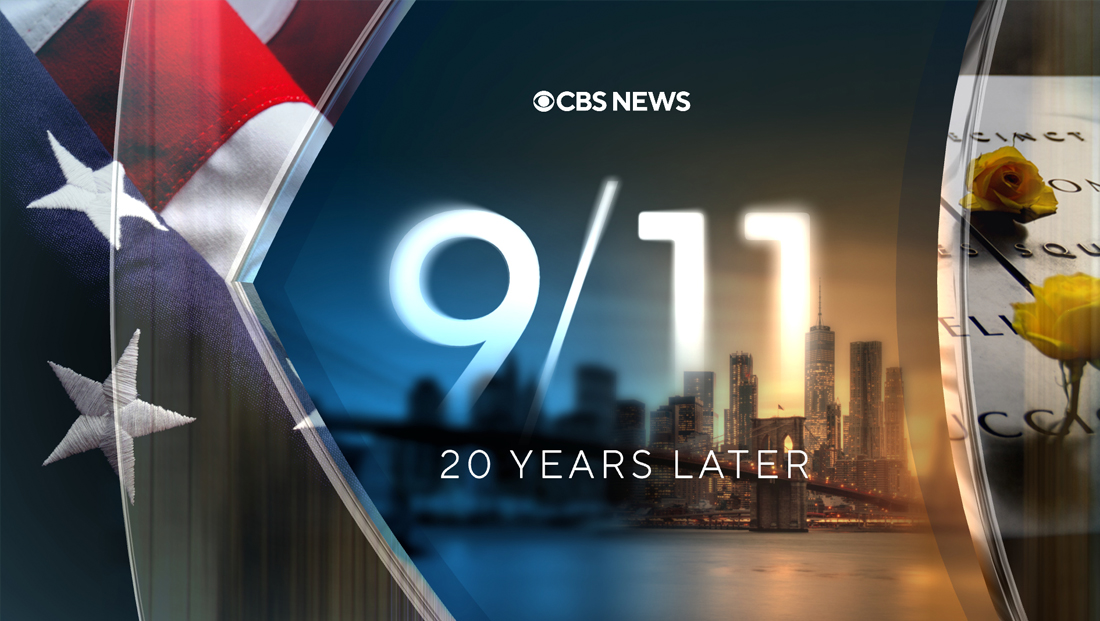 Many major networks in the U.S. and around the world are preparing to mark the 20th anniversary of the Sept. 11, 2001, terror attacks that resulted in devastation in New York, Washington, D.C. and Pennsylvania.

How the networks are covering the 20th anniversary of 9/11 https://t.co/NNsZ2Zc1Vr #TVNews #BroadcastNews

As networks release their key art and looks for marking the occasion, we’ll update this post.

CBS News released key art for its coverage that combined the American flag on the left side of a glassy portion of an oversized eye, with the negative space showcasing a New York City skyline as it appears today.

It’s elegantly faded in the “9/11” charters that get a slight glowing edge, while the tagline “20 Years Later” appears below.

On the far right, inside what would be the “iris” of the eye is a photo from the 9/11 memorial. The overall color scheme goes from a somber blue to bright orange, a gradient that suggests hope while also tying in nicely to the dominant colors in the photographic elements on either side of the look. 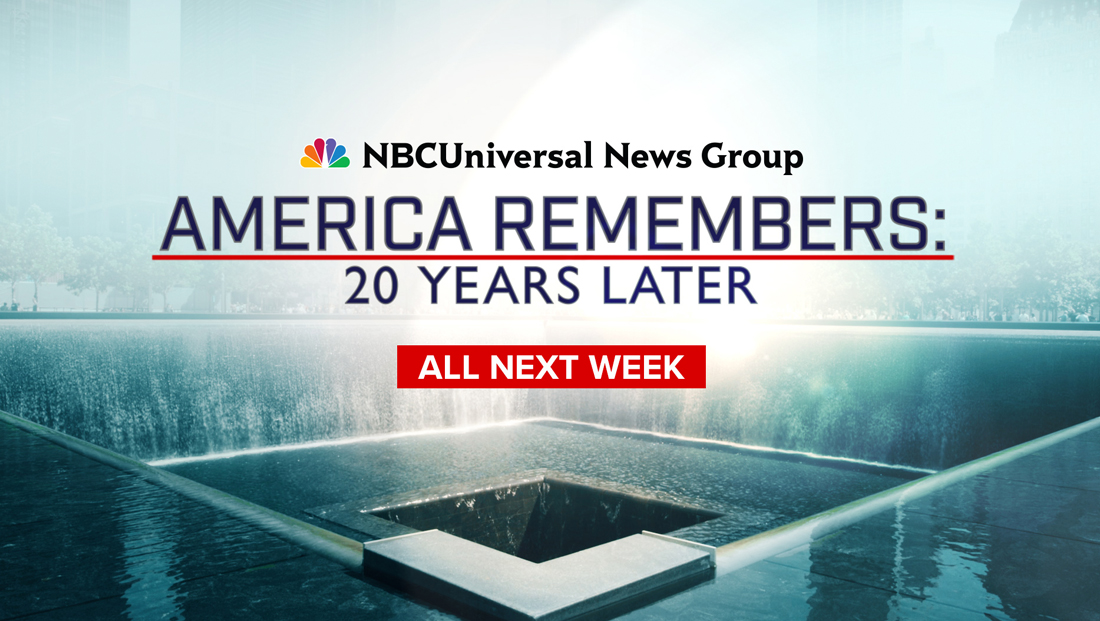 NBCUniversal is, as is typical, consistent branding across its networks (with the exception of Telemundo) under the banner “America Remembers: 20 Years Later.”

Its key art features a dramatic image of the waterfalls of the 9/11 memorial, cut into the ground of site of the twin towers.

The logotype uses a combination of a boxier sans serif with rounded corners and a more humanist geometric below, which is a bit of an odd combination.

Variations of this look are being used by NBC News, MSNBC and CNBC. 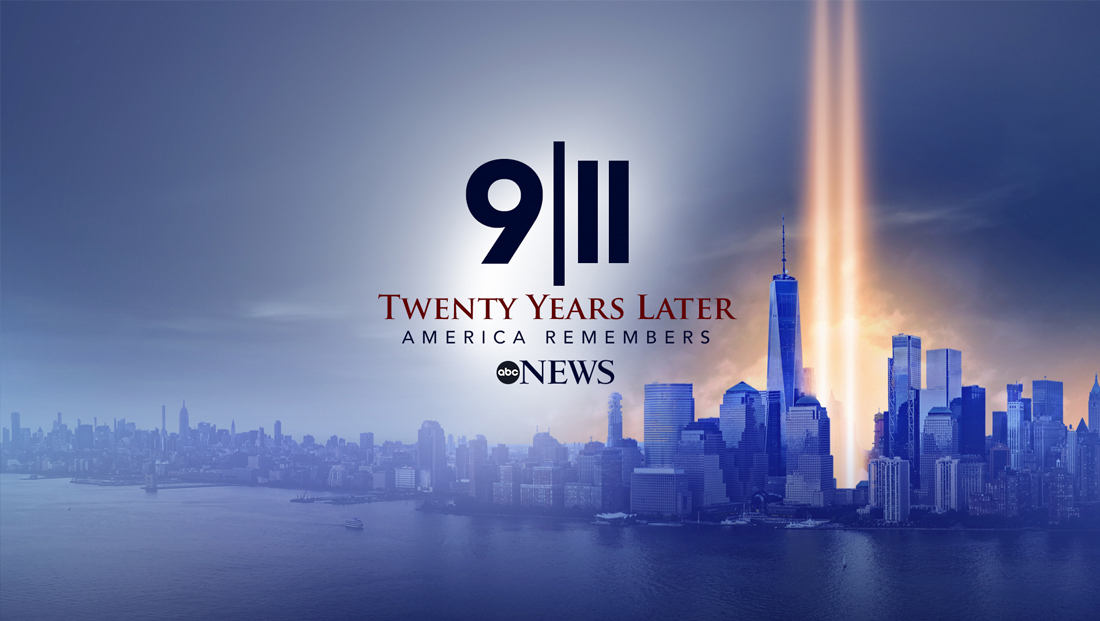 ABC News has stuck with a graphical motif that’s been common over the year when referring to 9/11 — using the vertical shapes of the “11” to allude to the twin towers. That point is driven home by two vertical columns of lighting peeking up from behind the new One World Trade Center tower in a purple-blue tinted NYC skyline seen in the background.

That vertical theme is continued by the use of a vertical pipe (“|”) glyph instead of the forward slash typically used in the U.S. to separate the month from the day in dates.

The network set the title “Twenty Years Later” (notice the number is spelled out) under in what appears to be Trajan. 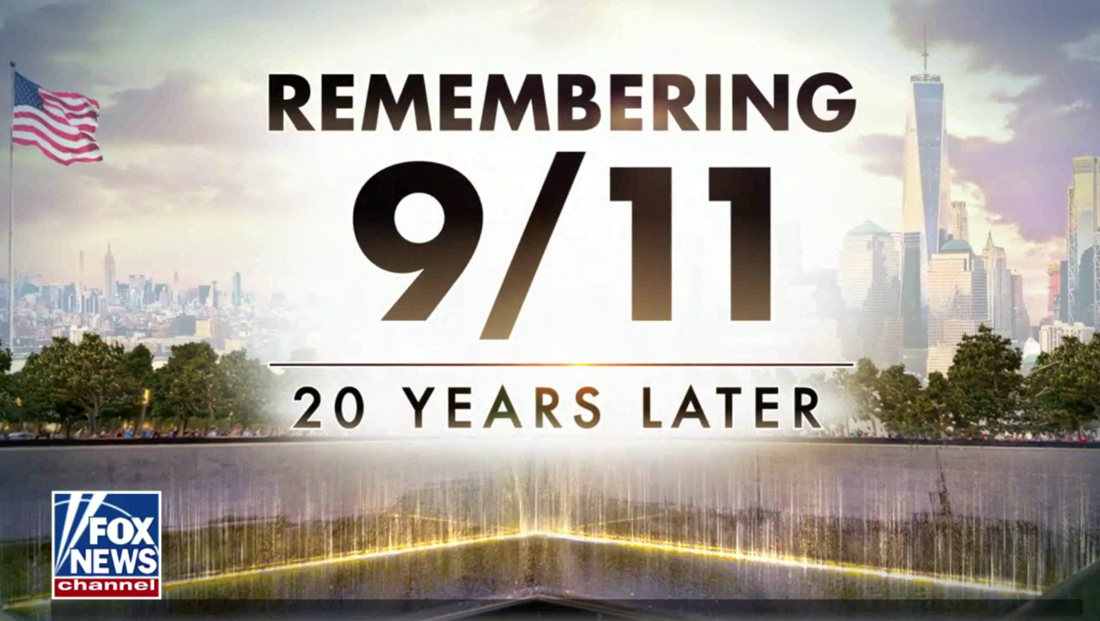 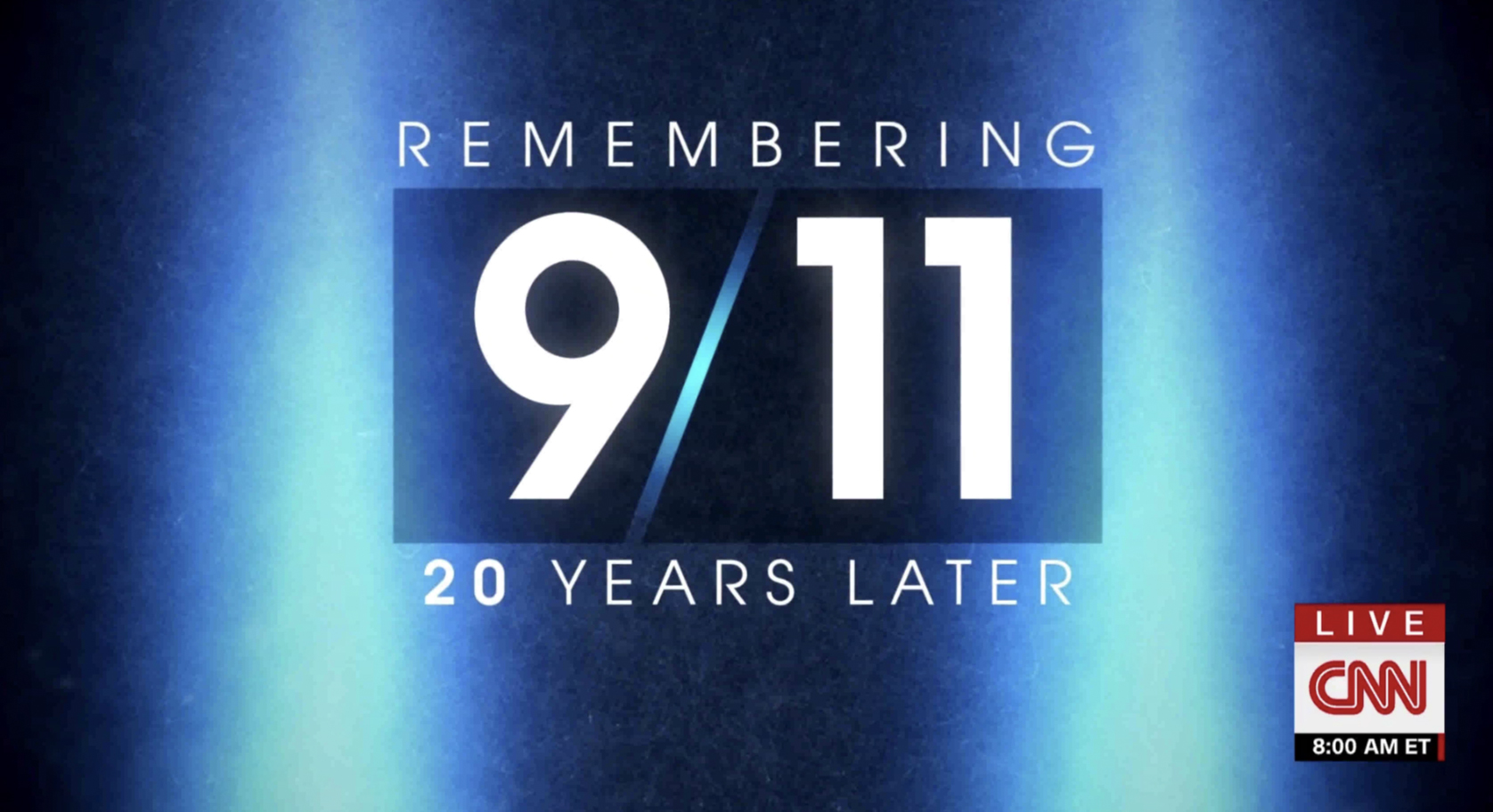 CNN uses a deep blue with two vertical shafts of light along with the numbers “9” and “11” inside of two boxes with an angled slash. Along top was the word “Remembering” and “20 Years Later” ran along the bottom. 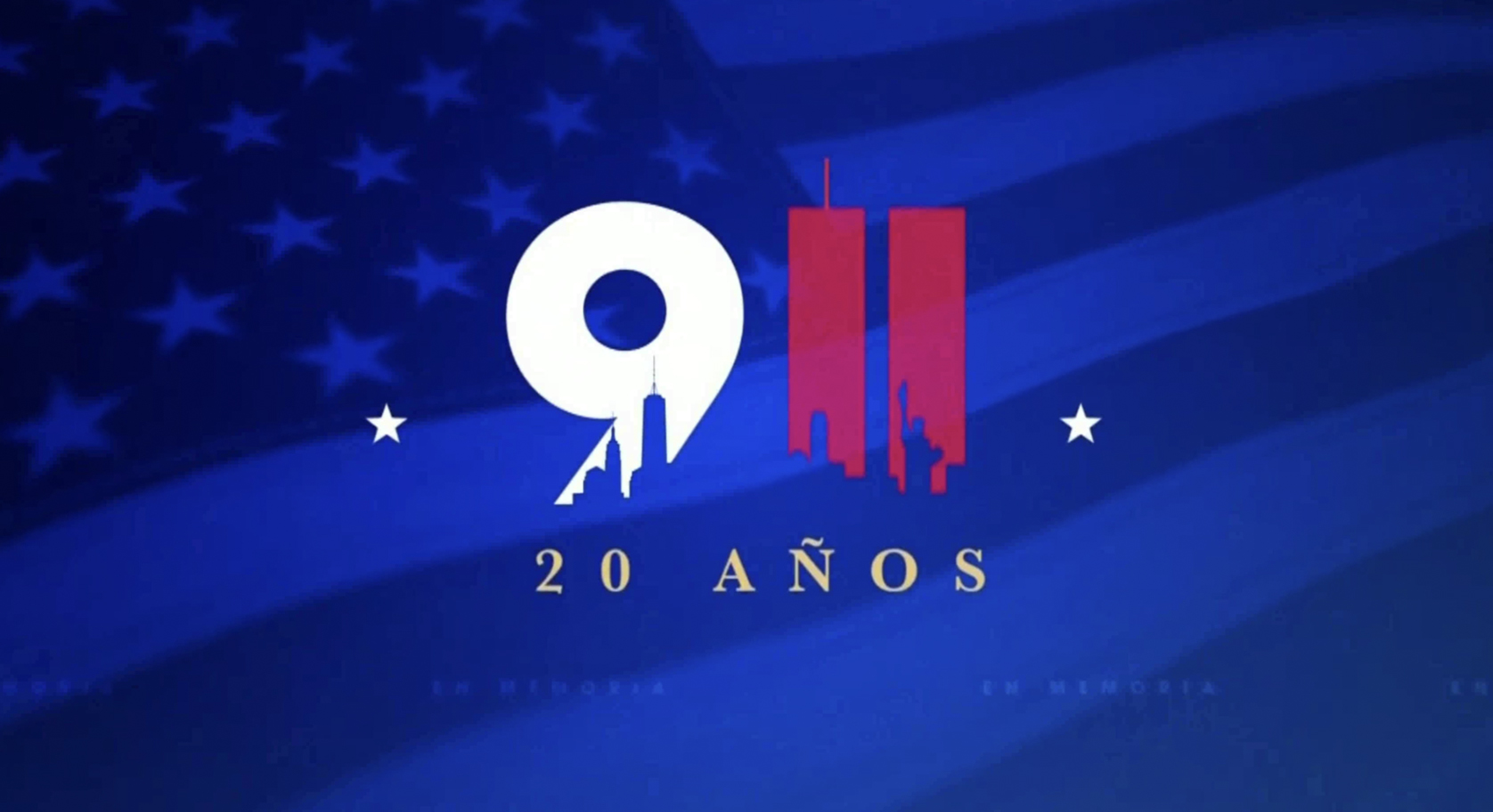 Telemundo used a deep blue American flag background with the numbers “9” and “11” shown in the middle in a bold geometric sans serif. The “9,” which was white, included the silhouettes of Lower Manhattan buildings, including what appears to be the new One World Trade Center. The “11” is set in red with additional building outlines as well as one of the State of Liberty.

Under this the words “20 Años” (Spanish for “20 years”) appears in a gold serif, elegantly spaced out. 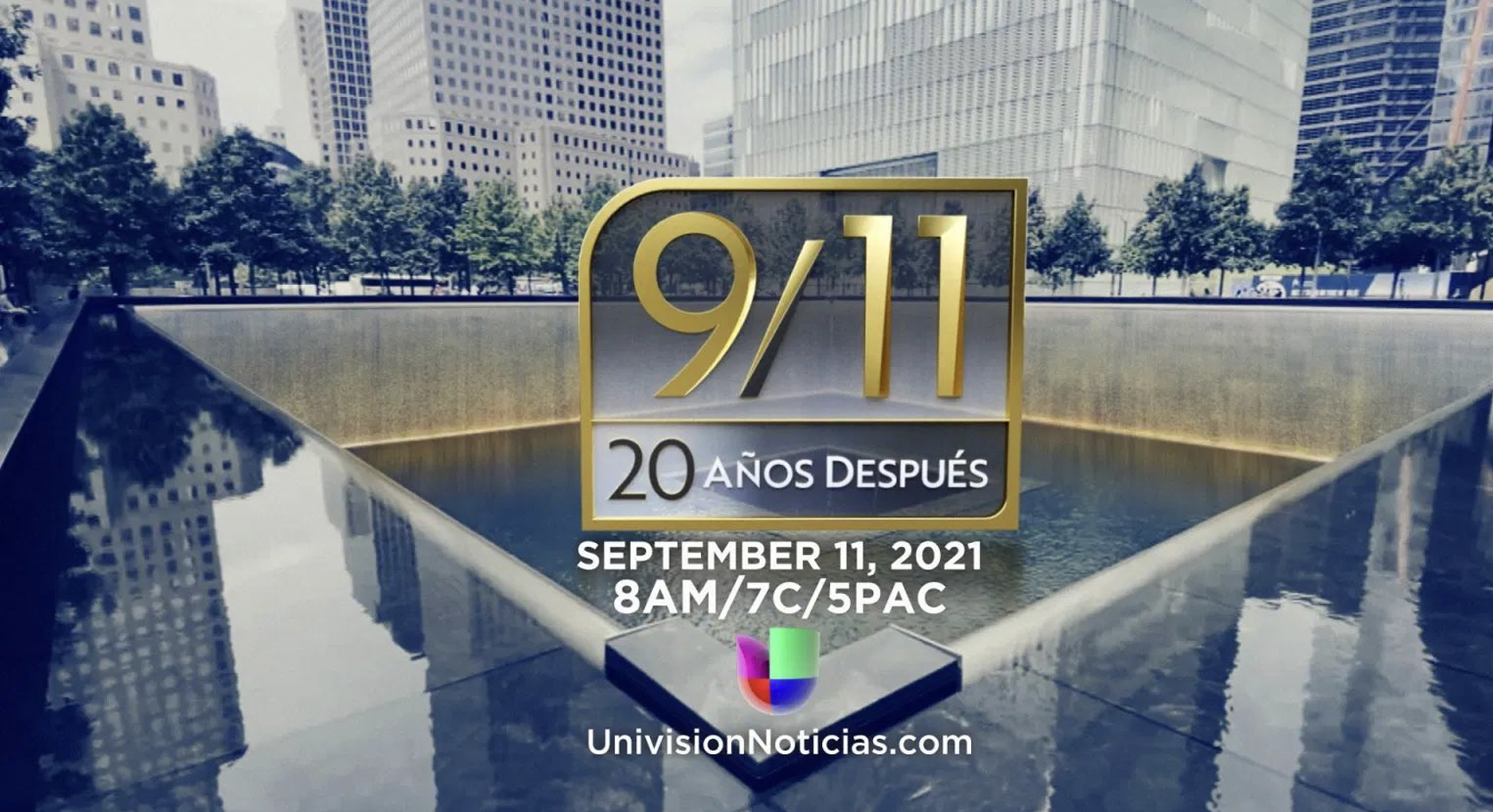 Univision used a gold logo with unique angular 3D elements added to the numbers and slash, which could be read as a nod to the faceted facade of One World Trade Center. Below is was “20 Años Después” (“20 years later”) separated by a thin gold line.

The entire lockup is set inside a gold border with a curved upper left that appears to match the circular upper part of the “9,” while a smaller curved element is in the lower right.