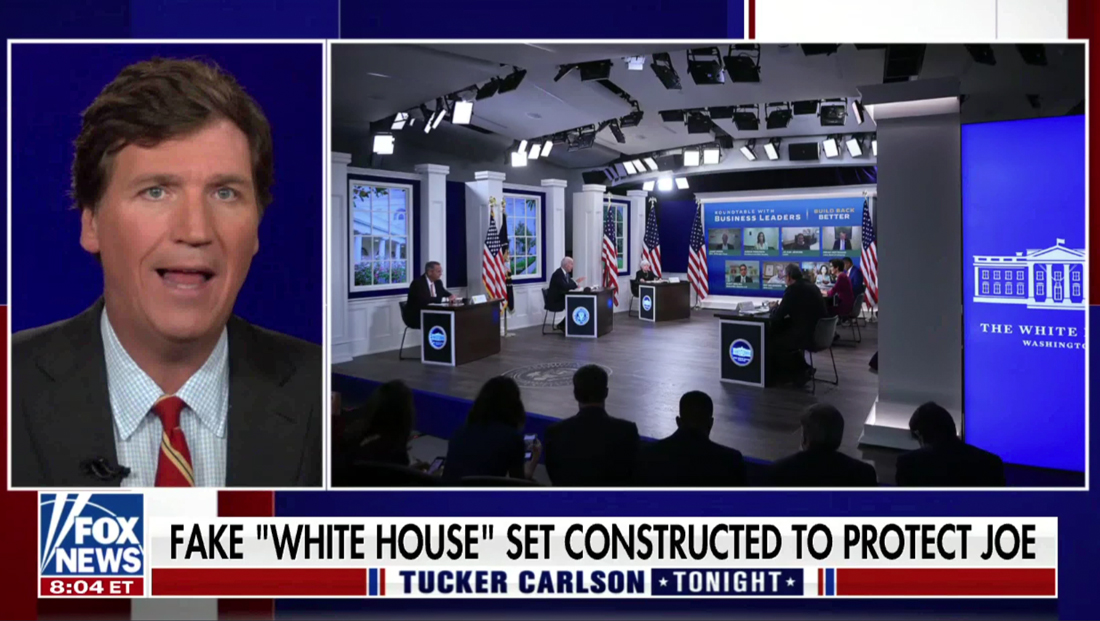 Toward the end of September 2021, memes began circulating that Biden received his coronavirus booster shot on a “fake” White House set.

That was quickly fact checked by multiple sources, who confirmed that the space Biden’s shot was administered in is inside the South Court Auditorium of the Eisenhower Executive Office Building.

The meme creators were actually a little late to the game — the space has been used for months for a variety of events, first with a variety of freestanding LED video walls used to show remote video feeds and “step and repeat” style backgrounds.

It can be configured in a variety of ways, including using small, standalone “desks” for participants of a meeting or video conference, a standalone lectern or, in the case of the booster shot, a single chair.

This is well documented by official White House photos, pool photos and video feeds from inside the space that has aired on nearly every major news network.

At some point, the stage left wall was replaced with three “windows” created with vertically mounted LED panels and complete with faux columns and mullions. It’s this wall that appears to have triggered the notion that it’s somehow a “fake” White House.

After running a collage of clips of Biden stumbling over words in public remarks (Biden has been public with his battle with stuttering), Carlson did acknowledge that the space is in a separate building but questioned why the administration needs that space when they have the real White House at their disposal.

He then cited Donald Trump’s surrogate and former aide Stephen Miller’s explanation for why the real White House isn’t being used.

The reason? At least according to Miller, it’s because the various spaces in the White House don’t allow Biden to use a teleprompter or monitor to read prepared remarks while directly looking into the camera.

Instead, Tucker said, citing Miller, Biden would have to use “side by side” teleprompters with freestanding glass panels that reflect the words on a monitor mounted in the base of the unit — and these are visible in wide TV shots of the space.

At one point he also referred to the set in the auditorium as a “virtual White House,” which is inaccurate, because the scenic elements on stage are real, though simulated views of the White House grounds are fed to the “windows.”

“We can’t verify that that’s true, but it certainly sounds right,” Carlson said at this point.

The fact is, this statement is simply is not accurate.

Numerous presidents, practically going back to the invention of the modern-day camera-mounted teleprompter that uses a mirror to project words directly in front of the camera lens and allowing speakers to look directly at camera, have broadcast live speeches from numerous locations in the White House without side prompters. This includes Biden.

There have also been occasions when the side style prompters have been used by numerous presidents in multiple different situations (inaugurations, political conventions and rallies are key examples).

Perhaps Miller and Carlson were somehow suggesting that Biden is so feeble he needs the camera to be very close to him in order to read off the prompter — freestanding side prompters do sometimes offer the advantage of being closer to the person speaking.

That argument is pretty weak too though — it’s possible to make the font bigger in most teleprompting software (within reason), though often when the text is made bigger, the person reading off of it appears to move their eyes back and forth more because fewer words can fit per line.

By the way — it’s sort of ironic that Carlson is accusing someone from using a little bit of TV trickery.

Fox built Carlson a set in Maine with a rustic faux cabin or lodge look and feel for his “Tucker Carlson Today” show.

He also broadcasts his primetime “Tucker Carlson Tonight” from in front of a video panel showing an image of Washington, D.C. — often while in that same Maine studio setup, all while relying on a teleprompter.

This type of setup is ubiquitous in TV news today — with imagery of other cities showing up behind anchors who are elsewhere. Even before the use of monitors as backgrounds news sets frequently featured duratrans with skylines or other imagery that would not be physically possible to see from a windowless studio.

From a production standpoint, it also makes a certain amount of sense that the auditorium is being used for televised events because it likely doesn’t require as much set up and tear down for each event.

If every event featuring Biden was done from the Oval Office or East Room, as Tucker suggested would somehow be more acceptable, the White House would either need to leave the cameras, lighting, audio and other gear set up all the time or set it up and take it down each time it’s used — and that can be a delicate process inside of a historic building such as the White House.

Meanwhile, the Eisenhower auditorium is better equipped for TV broadcast — with ceiling-mounted professional lighting and audio and video hookups hardwired in.

There’s also the press briefing room inside the White House proper that’s set up for live broadcasts but — despite what many people think — this space is cramped and is not ideal for multiple participants, especially in the middle of a pandemic when social distancing protocols are in place.

During the pandemic, the White House has cut back on the number of press allowed in the room and the Eisenhower Building auditorium appears to have a much higher seating capacity — and therefore allowing more members of the press in.