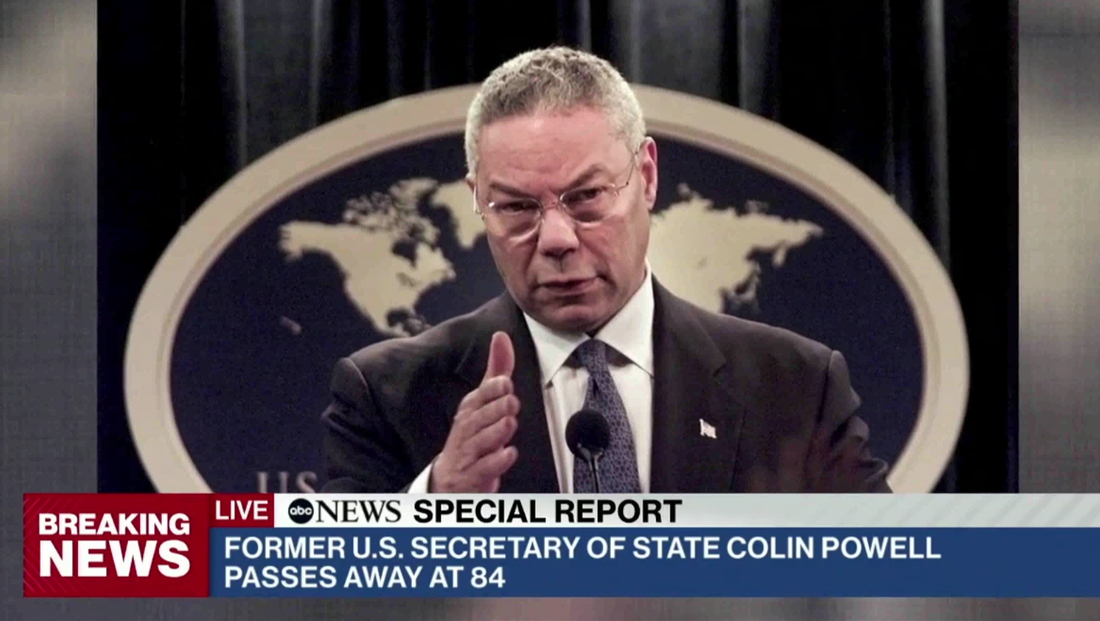 News of former Secretary of State and U.S. Army General and Colin Powell’s death was posted to social media around 7:48 a.m. eastern and cable networks were among the first to pick up the news — while the news was missing from at least one major market’s network feed.

CNN was first among the cable networks, with “New Day” anchor John Berman interrupting an interview with two authors around 7:58 a.m. eastern to deliver the news.

After Berman interrupted the interview, the network ran its breaking news stinger and the headline popped up in the lower third banner before Berman even read it on camera. He then quickly tossed to what was likely a pre-produced look at Powell’s life.

“Fox & Friends” announced the news at about 8:03 a.m. that happened to occur to a bit of a lull in the program.

MSNBC’s “Morning Joe” interrupted what appeared to be a pre-recorded interview at around 8:06 a.m. with the news.

On the network side, ABC and CBS both opted to offer special reports that aired in the Chicago market, with ABC’s coming at 8:08 a.m. and CBS’s at 8:17 a.m. eastern.

NBC notably did not appear to interrupt programming at all in the Chicago market and didn’t mention Powell’s death during the first two hours of “Today” as it aired in the city, according to airchecks reviewed by NewscastStudio.

It’s not immediately clear if this was due to some kind of technical glitch that prevented WMAQ, the NBC owned station in Chicago, from picking up the network special report, or the network did not offer any live coverage to affiliates.

“Today” also did not mention the news during its 8 to 9 a.m. block, which is also taped delayed for Chicago, despite the fact the news had already been reported across numerous other platforms at that point.

The show did experience an abrupt fade to break at 8:08 a.m. eastern time, though it’s not clear if this might have been a case of a block running too long or if it was somehow related to a special report.

News of Powell’s death did appear at the beginning of “Today Third Hour” that airs at 9 a.m. eastern and central in most markets. This portion of the show was produced from the satellite production area on the second level of Studio 1A, which sometimes occurs when the main studio is needed to produce special reports, updates or other productions.

The timing of the news meant that, on the east coast, most stations were well into the normal network morning news programs. These programs are typically aired on tape delay for the rest of the country.

In the central time zone, most stations were near the end of local news or just starting the first hour of the tape delayed morning newscasts.

The video clips accompanying this article are from the Chicago market, which is in the central time zone, so the feeds went from a tape delay of “Good Morning America” and “CBS Mornings” to a live special report, hence why, for example, anchor Gayle King appears to essentially interrupt herself.

When breaking news occurs between 7 and 9 a.m. eastern, it’s not uncommon for networks to cut in with a special report across all time zones live.

Frequently when this happens, production of the morning show will continue as normal so that a “full” version of the show, with all of its features, is available for other time zones and digital platforms, though these versions can also be updated with breaking news if needed.

During breaking news that continues to evolve, special coverage is extended beyond the relatively short specials that aired in Chicago, given that, beyond announcing Powell’s death, not many new developments of the story would be readily available.