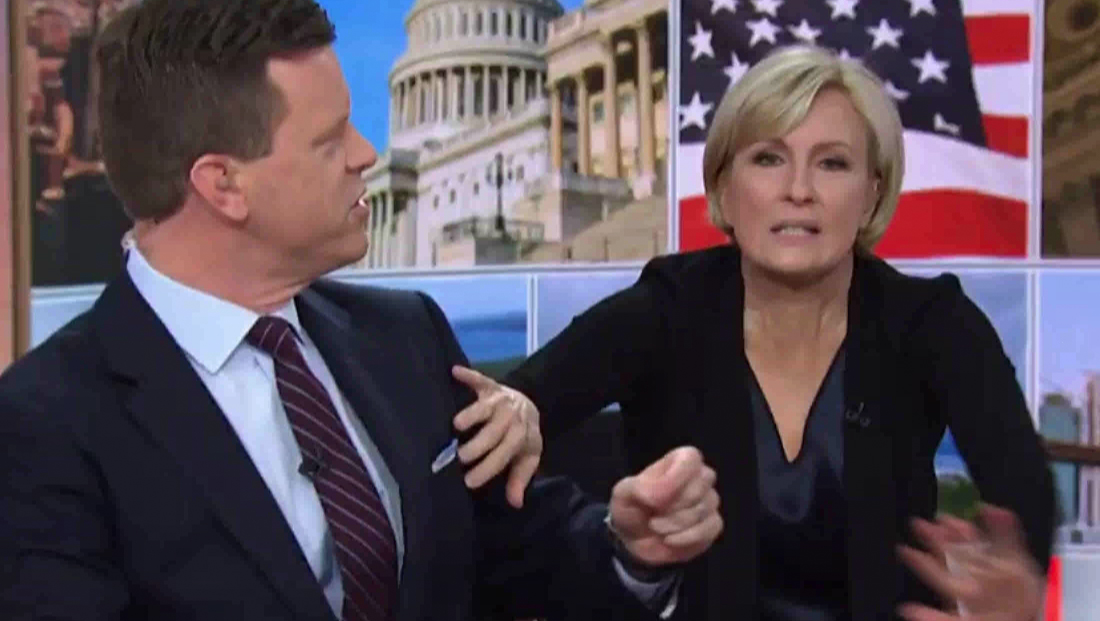 Mika Brzezinski felt the need to “protect” fellow anchor Willie Geist from a fellow anchor on set during a handoff from “Morning Joe” to “Stephanie Ruhle Reports” Tuesday, Nov. 9, 2021.

It all stems from an incident on Sunday, Nov. 7, 2021, when Ruhle, standing along the route of the New York City Marathon, jumped over a protective barrier along the sidewalk to give Geist, who was running in the event, a hug.

At the end of the “Morning Joe” Nov. 9, the show had a little fun with the incident on the first day both Geist and Ruhle were in studio together after the race (Geist took Nov. 8, 2021  off).

As “Morning Joe” wrapped, anchor Joe Scarborough expressed his “concern” over Geist’s safety while Brzezinski huddled around his chair in the southeast corner of Studio 3A.

Ruhle, meanwhile, was set up on the west side of the studio to kick off “Stephanie Ruhle Reports” standing next to a wild video cart.

Geist decided to a be a good sport and unhooked himself from the anchor desk and ventured over by Ruhle to give her a hug.

All of the action was captured by a variety of wide shots of the newly renovated studio.

Normally “Morning Joe” and “Reports” don’t have a formal handoff — one team signs off and the open for Ruhle’s hour runs.

When that time came Nov. 9, the feed was abruptly cut off by the control room and Ruhle started her live hour.

The handoff between “Joe” and “Ruhle” is typically the one of the only ones that involves going from one part of Studio 3A to another, assuming both shows are originating from the space on a given day.

Because of how MSNBC’s schedule works out, with some shows originating from Washington or other studios within 30 Rock, it’s not often that back to back shows originate from 3A.

“Morning Joe” often has a “scaled back” presence in 3A when one or both of its hosts are joining the show remotely due to a requirement that requires Scarborough to be in Florida 183 days of the year, where he joins the show from a remote studio the network built inside his home there.