How the networks (and Chicago stations) covered the Kyle Rittenhouse verdict 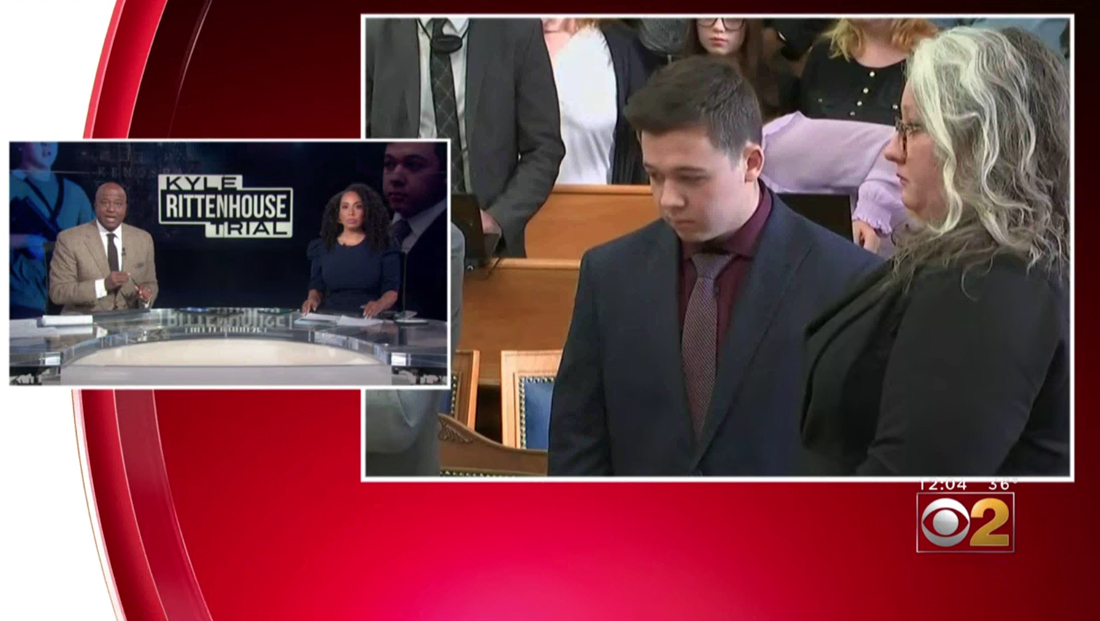 News of a verdict in the Kyle Rittenhouse trial broke started coming in a little after 1 p.m. eastern time Nov. 19, 2021, and the networks jumped to break into programming.

ABC News had Witt Johnson on hand to handle the news.

NBC News was the only network to have its coverage helmed by its primary anchor, Lester Holt.

“ABC World News Tonight” anchor David Muir and “CBS Evening News” anchor Norah O’Donnell were both on their respective newscasts Thursday, Nov. 18, 2021, so it’s not clear why neither of them were on hand to anchor coverage.

CNN was in middle of a report on the Build Back Better bill when Tom Foreman had to toss back to Ana Cabrera, who announced the breaking news with the network’s standard stinger.

MSNBC was on air with “MTP Daily” and Chuck Todd had just finished setting up a story about coronavirus vaccines in red vs. blue states when he appeared to be told in his IFB that the verdict was in and rather seamlessly was able to pivot to Shaquille Brewster on the ground in Kenosha.

Fox’s cable channel had just started “America’s Newsroom” and led with an alert about the possibility of a verdict coming down soon before spending some time covering related stories. It was in the middle of a voiceover on that when the network segued into news that a verdict had been reached with a “breaking news” flag appearing above the lower third.

NewscastStudio receives airchecks from the Chicago market, which counts Kenosha, Wisconsin, as part of its extended viewing area. In addition, Rittenhouse, who was accused of killing two and shooting another during protests in the city after a white police officer shot a Black man, Jacob Blake, is from Antioch, Illinois, which is squarely within the Chicago DMA.

Blake was left paralyzed from the waist down after being shot in the back. The police officer has not been charged with the shooting.

Because of this, all of the”big four” local stations opted to carry their own special coverage instead of the report provided by their respective networks.

ABC owned WLS went to an extended period of dead air during “GMA3: What You Need to Know” before a generic “ABC 7 Eyewitness News” stinger played, revealing anchors Rob Elgas and Judy Hsu at the anchor desk, having apparently just rushed into the streetside studio from the station’s newsroom above.

Elgas could been seen adjusting his microphone wire on camera.

WMAQ, which is owned by NBC, had a bit of a rough cut in too.

Anchor Patrick Fazio handled the report solo, but it appears he may have forgotten to put on a mic (no mic was visible on his tie or lapel and when he was on the air for the station’s normally scheduled 11 a.m. newscast, the mic was plainly visible on camera clipped his tie).

He continued to attempt to introduce the story, though it was barely audible, before the station cut to what sounded like the natural audio from inside the courtroom. Eventually the audio issue was fixed and the Fazio could be heard at full volume.

Fox owned WFLD was already on the air with its noon newscast (WLS, WMAQ and WBBM do not air noon newscasts) when it appeared the on duty meteorologist was told to wrap up. After a brief audio issue, anchor Sylvia Perez tossed to Joanie Lum in Kenosha.

There was an awkward moment where she wasn’t on camera and Perez wasn’t sure if she was ready to go, but then she managed to walk into frame and start her report. Lum had just been on the air earlier in the show with a live report from the same location.

Lum mentioned that the media was told they would get a one hour “heads up” on the verdict, though that apparently didn’t happen because the verdict ended up being read minutes later.

The market’s CBS owned station WBBM had what was likely the cleanest cut in — it ran its breaking news open and then cut to two shot at its main anchor desk with a Rittenhouse graphic between the anchors.