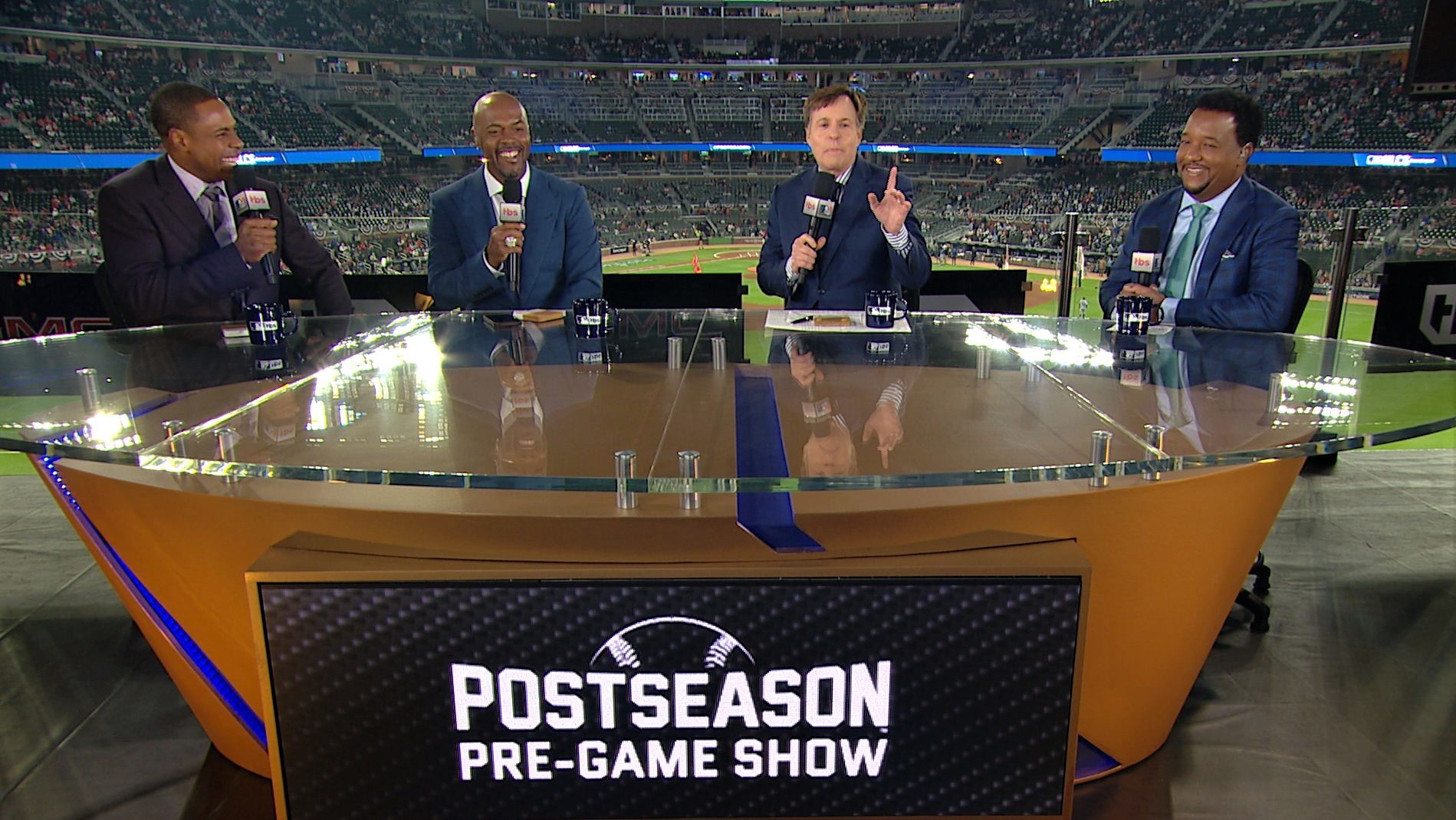 The Atlanta Braves hadn’t won a National League pennant since 1999, and few “experts” expected them to do so this year, even though they managed to squeak into the post-season playoffs. But baseball is, if nothing else, a game that has a way of turning improbabilities into realities.

Perhaps because of this, Mike Grabowski and the team at The Lighting Design Group were ready for anything when the Braves began their playoff against the favored Milwaukee Brewers. Their interest, of course, involved more than baseball; as they were tasked with lighting the pre and post-game commentary for the National League Championship Series, between the winners of the Braves-Brewers and Dodger-Giants clashes.

“It was a bit of a unique situation,” said Grabowski. “We didn’t know where we’d be going to light the first game of the NLCS, because of the way the baseball playoffs work. As things turned out we didn’t learn we’d be working in Atlanta until the Dodgers beat the Giants (had the Giants won, the first game would have been in San Francisco). That was less than 48 hours before the first pitch of Game 1 was thrown.”

Given the tight time frame, The Lighting Design Group had gear ready in both locations. Featured in each of the 4Wall Entertainment supplied rigs were seven of the new Chauvet Professional onAir IP Panel 2 soft light fixtures, as well as groups of Maverick Storm 1 Wash units.

Arriving at Atlanta’s Truist Park stadium, the design team encountered a surprise. Instead of the 11’ square truss, they were expecting to find over the 20’x20’ indoor/outdoor stage, they found something a bit shorter.

“Some of the dimensions we had to work within were off,” said Grabowski. “So we got cameras up and cut all of our truss. Then, we had to reach deep into our bag of tricks, and rig off of some of the stadium’s structure steel, and transition the rig to stands.

“Thankfully, by that point, we knew we only needed to have enough level for a late evening/nighttime broadcast, so we could get away with a lot less output,” continued Grabowski. “The OnAir2 panels became the crux of our rig in that scenario. They carried pretty much everything, with a little bit of ellipsoidal used to key in and get a little specificity of the level for each host.”

Wrapped around the stage in Atlanta and later in Los Angeles, the onAir IP Panel 2 units were used for dead on front fill, side fill, and upstage cross lighting. “They were invaluable,” said Grabowski. “Not only are they very bright, but they have excellent dimming and color rendition. The other huge thing is their IP65 rating. I mean, there are the obvious benefits, since if it rains, the gear is fine. But it’s also a great time saver at the end of the night since the crew isn’t spending a ton of time bagging and wrapping all of the units. This speeds things up at the end of the night and the start of the next day. I think this is a slightly overlooked benefit of IP65 rated gear.”

Deftly using the soft light panels and the rest of his rig, Grabowski balanced his design to ensure smooth, even key lighting for the talent on stage, while also adding a warmer more evocative element to the broadcasts by accenting the live stadium background.

“It’s always about color and contrast,” said Grabowski. “Having a lot of options and keeping the rig nimble and versatile are the essence for me. All I want to do is make everyone look like the best version of themselves. But it’s not just my work—it’s also a collaboration that includes how the director frames the shot, how our video engineers coordinate efforts to make sure we aren’t competing, and so much more. The variety of skin tones on the set is what it is. You want to make sure everyone is working from the same playbook. This helps make a project sing.

“Also, in a setting like a baseball stadium, you want the actual location to be a character in the broadcast,” continued Grabowski. “This means you need to treat it with as much sensitivity as the talent on the set. In this scenario, I couldn’t light the stadium, so I had to accept it for what it is, and model my plan after this unchangeable reality.”

Although the open-air background added to the ambiance during the broadcasts, it did present challenges with ambient light during the pregame segments in Los Angeles. “Some of our pregame went on air as early as 2:30 pm local time,” said Grabowski. “In that particular scenario, we were dealing with the sun hitting our talent stage in excess of 8,000 footcandles. This was all from behind, but still — that’s a ton of light! Our spot head fixtures really had to do the lift, but we needed a strong soft base. We ended up pushing out almost 6,000 footcandles (a normal studio show is as low as 20 footcandles), but we still had to manage output, while making folks look good at the same time”

Grabowski ended up using a wide range of color temperatures to adjust to a changing background influenced by things such as the sun setting, cloud coverings, and stadium lights kicking into full gear. Through it all, he always made sure the background showed up as realistically as possible. 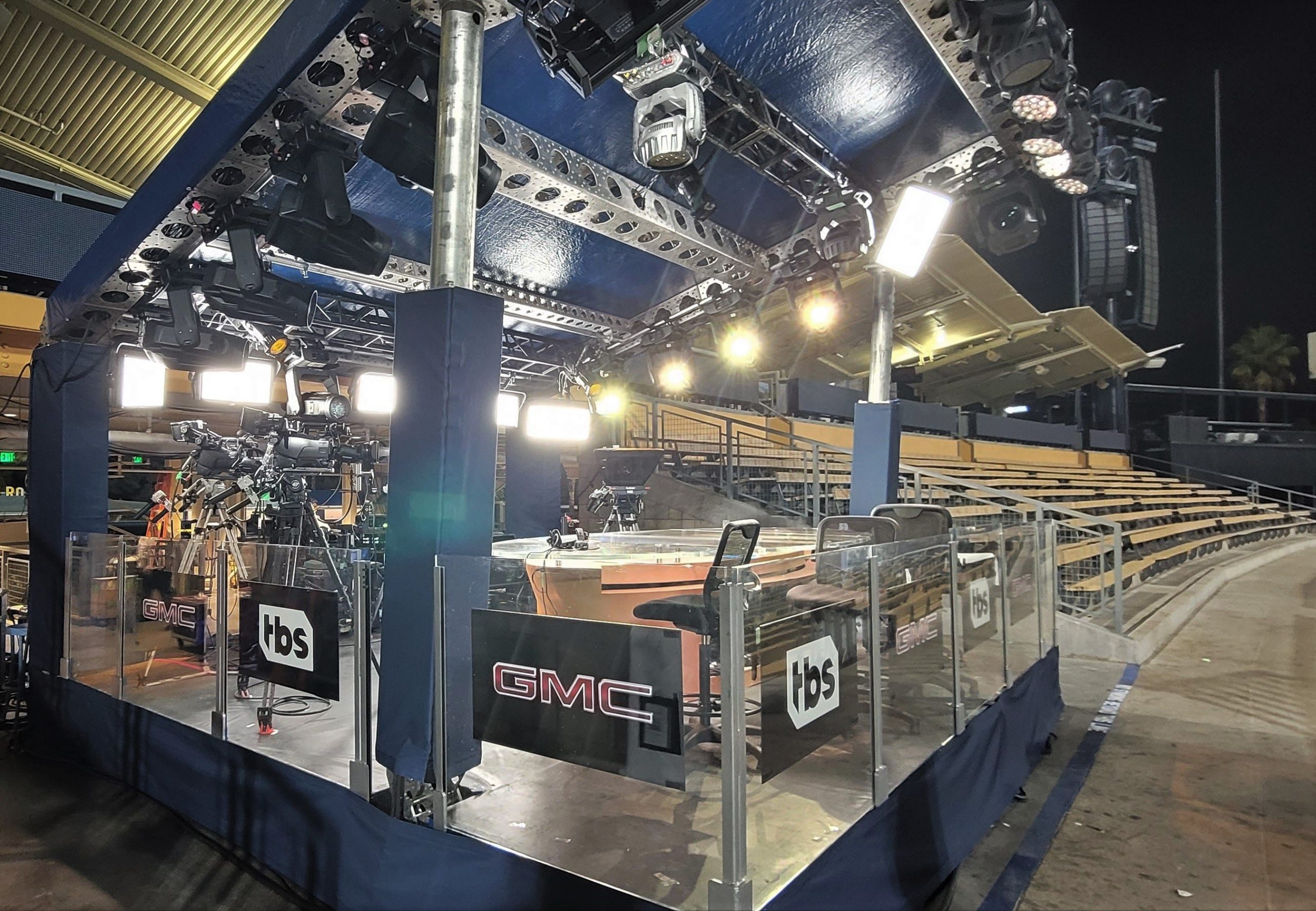 “TV viewers need to know we’re in a real location,” he explained. “My approach was to let the stadium lights read a tad cooler because if it was all a complete dead-on match, it would have felt almost comped in, like a green screen. You have to show the value of your location by letting it impact the images on camera!”

The set’s lighting design maintained this balance throughout the six-game series, which was won by the Atlanta team, earning them their first pennant in 22 years. (Later they would defeat the Houston Astros to win the World Series as well.) Grabowski credits The Lighting Design Group team including senior project manager David Cook, Gaffer Seán Linehan, and Best Boy Evan Cope with helping to accomplish this feat.

As in baseball, great things happen in lighting when teams pull together. Only in the case of lighting, good results are far easier to predict.