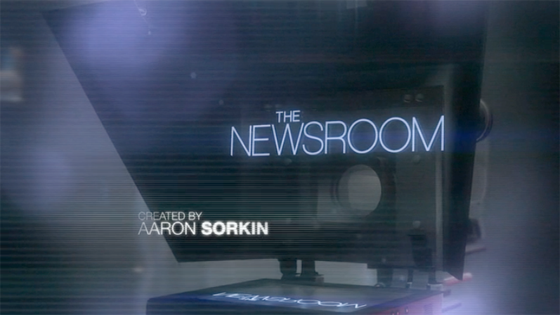 HBO’s much hyped “The Newsroom” debuted last night. The show is already being paned by critics, but NewscastStudio is taking a look at the show’s scenic design, including the “set-within-a-set” where the program’s centerpiece show “News Night” originates from.

Quite appropriately, the centerpiece of “The Newsroom” is fictional network Atlantis Cable News’ newsroom, which serves as the backdrop for the anchor area for “News Night.”

The newsroom itself has abundant glass and workstations, all backed by sea foam green walls. The newsroom also sports exterior windows overlooking a New York City skyline, some printed graphical backgrounds and, of course, a row of clocks showing the time around the world.

A continuing theme in the design of the newsroom area is horizontal striping — from the frosted horizontal banding on the interior windows to louvres on the exterior ones. The set itself is framed by light wood columns in a color that complement the green walls in the newsroom behind.

A large anchor desk, fronted by matching wood and a metal plate sporting the network’s logo, serves as home base for the set. To the right is a large printed graphic with the “News Night” logo. The logo, incidentally, is very reminiscent of the “ABC World News” title card.

The set also includes a printed graphic-backed area with flat screen that anchor Will McAvoy uses for live interviews. Overall, the set and newsroom have a bit of a tired, bland look and certainly lacks some of the “bling” that has become so popular on news sets today.

That said, it is a fairly clean look. Some areas of the set, especially the newsroom area, have excellent layering of clear glass, frosted glass, graphics and structural elements, that give a sense of depth.

The layering, however, falls flat on the anchor area, especially behind the interview flat screen. The frosted background is washed out and flat and the screen itself seems like it was just thrown in the corner. Another area the set is a bit weak is the framing of shots. The shot shown above, which is the main one shot, has some distracting elements, such as the large gray pillar in the middle, and doesn’t include some of the stronger elements of the set. The entire background could also stand to be more out of focus, making the people and clutter in the background less identifiable.

The on-screen graphics used on the broadcasts are very basic, done a bright blue and blueish white color scheme that includes a large topical banner, show logo in the left corner and ACN bug to the right, with a ticker below. Like the title card, these graphics also bear a striking resemblance to a real life network, this time CNN.

It’s worth noting the graphics appear to fail to take into consideration 4:3 framing, but the fictional network could be letterboxed, similar to CNN or Fox News.

Of course, it’s worth noting that many of the scenic design decisions could be more for the benefit of the show itself. For instance, producers have discussed the strategy of having cast members fully visible in the background of shots, even if they are not part of the scene, for an added sense of realism. The subdued design of the newsroom and set, meanwhile, could also be a nod to the network’s news philosophy or even financial situation, elements that will likely continue to unfold in future episodes.