CNN continues use of virtual 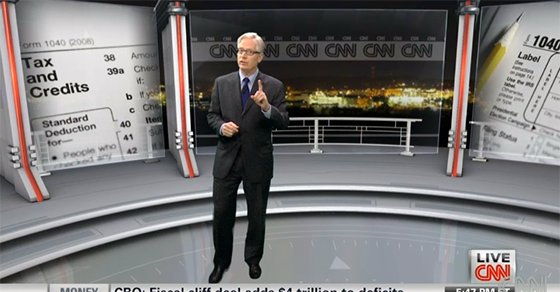 We’ve noticed CNN has continued using virtual technology now that the election is over.

This chromakey motion-tracking technology has been the standard in Europe, with only some adoption in the U.S. Networks like NBC, CNN and Fox News only seem to roll it out during elections, with CNBC using it for mainly taped specials. The technology allows for some cool reporting techniques, but oddly CNN continues to feel the need to use snappy camera moves for it, almost like you’re watching a spy movie. Foreman will be talking about a chart, then a camera will gitterly shake and pan to the floor.

While we applaud the use of this expensive technology for times other than the election, it still needs a bit more refinement from the major networks… or they should just search on YouTube and see how European stations are skillfully using it.