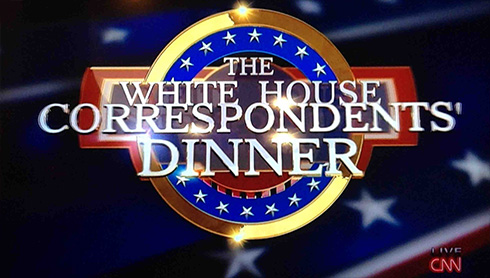 MSNBC and CNN both covered the White House Correspondents’ Dinner live Saturday night and rolled out special graphics packages for the star studded night that gave each network its own unique look while still speaking the presidential nature of the event.

Fox News, meanwhile, did not provide live blanket coverage and did not use unique graphics for its coverage.

CNN’s title card for the event, shown at the top of this post, includes a highly stylized, 3D animation with a polished look backed by blurred stars and stripes.

The bold gold and blue rings surrounding the words made it a bit difficult to read the title text, which appear in a silver-toned treatment. CNN’s title card included sweeping animation that sawthe 3D words, gilt in gold, fly by the viewport in extreme close up before coming together to form the final look. Overall, CNN’s graphics had an bold, elegant look and feel in a brassy sort of way. Over on MSNBC, meanwhile, the look was much more elegant and subtle.

The main element of the package was a portion of the presidential sealed, designed to look embossed, set against a tan toned background. The animation before the title card used a similar look — but also added imagery of glassware and a bow tie positioned next to the embossed seal element.

With the exception of the title text, all of MSNBC’s graphics were softly focused and opted for a more photorealistic look than overly shiny 3D models. One nit-picky complaint about MSNBC’s design was that the typeface in the title card is poorly small capped — with the first letter of each word almost twice as big as the others, which causes an inconsistent look in the thickness of the letters that makes the entire image seem a bit unbalanced.