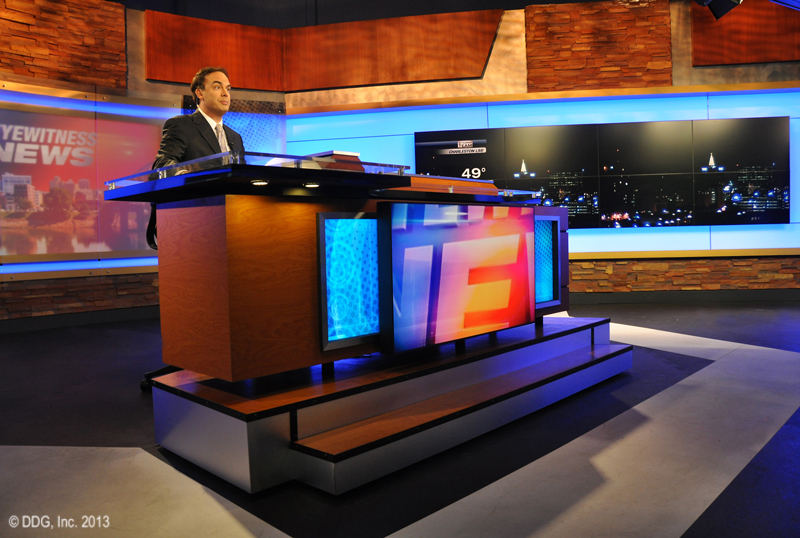 Charleston ABC WCHS-TV has been nominated for an Ohio Valley Emmy for excellence in set design. The set, which debuted in September 2012, was designed by Devlin Design Group.

“We wanted to create a dynamic and versatile visual presentation and storytelling environment for WCHS, fusing technology and architecture in a cohesive blend,” said Dan Devlin of Devlin Design Group. “We are thrilled about our client’s Emmy nomination, and very excited to be a part of their success.”

Combining all of the news set components; colors, textures, modern technology and led lighting, elevated WCHS-TV above their competition.

“From concept to installation the main focus of this design was to create a set that was vibrant, versatile with a sleek modern vibe to it and I think we achieved it,” said Kartik Dakshinamoorthy, scenic design director at DDG. “We’re thrilled and privileged to receive the Emmy nomination for WCHS Set.”

“We tasked DDG with building us a set that would be different and make an impact on the Charleston WV. market without alienating our core audience. Once again Dan and his team hit the nail on the head; the use of the look of local stone along with warm wood tones frames the modern technology perfectly. We appreciate the honor of being nominated for a local Emmy,” said Mark Nadeau, director of TV production for Sinclair Broadcast Group.

WCHS-TV now has a multitude of venues for their anchor and reporter placements for telling breaking news stories, weather or sports.

Images and video of the WCHS-TV News Set can be seen on DDG’s website.

Devlin Design Group is an advertiser on NewscastStudio.