An Innovative Design: It’s all about the details at NBA TV 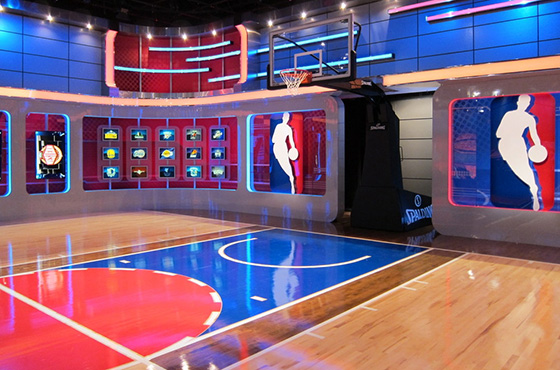 Creating a new home for NBA TV was a large undertaking by Innovative Show Design (ISD), bringing together design, technology and skilled people.

NBA TV wanted a technologically advanced studio, and ISD was able to deliver.

From the playing court to the studio court

NBA TV wanted to stand out from the crowded sports TV market and encapsulate the game into its set. Its number one request? A real basketball court on set.

“We wanted this entire studio to look and feel like basketball, and we felt that this could not of been achieved unless a minimum of a half court was incorporated into the design,” said Justin Garrone, artistic director at ISD.

The final design includes a true to scale half court, complete with a three point line and basketball goal. This was able to happen because of ISD’s research into the client.

To make the basketball court as realistic as possible, ISD worked with the same companies that supply the NBA. “I was amazed to watch the precision that went into this process.  It came down to 1/16″ of an inch, to make sure the goal sat in the correct spot on the court,” said Garrone.

Every detail of the court was important, right down to the flooring.

“We wanted the court to visually be familiar to the courts that the NBA teams play on.  Horner Flooring helped us thru this process and the grade that was chosen was 1st and better,” said Garrone. “This allowed for the clean bright white wood with some darker boards scattered throughout to add texture.“

ISD worked from the court out, using it as the first element of design.

“We drew the court in VW making sure that all of our dimensions were correct.  Once we knew the court consisting of the 3 point line would fit into the constraints of the studio, we designed the rest of the studio from this point. To be able to fit all of the elements of the design into the scenic walls we had to make the on camera side of the wall represent the out of bounds line. “ LED lighting was used throughout the set, saving energy, and providing a bright look on-air.

“This product was used most importantly for it’s ability to follow curves, but also because of its brightness as well as that it is flicker free on camera.”

“Each scenic element (header, columns, light box sweeps) are individually controlled from the lighting console.  The reason for this choice was to make the studio evergreen as far as the color palette.  This allows the studio to change it colors to match sponsors, teams, holidays, etc.”

The desk was also enhanced with a Martin Lighting 25 mil LED tile. Through this, the desk can have constant moving backgrounds and branding.

The NBA TV project was a 5,000 square foot undertaking by Innovative Show Design that combined skilled craftsman, design and lighting to create a new home for a rising sports network.