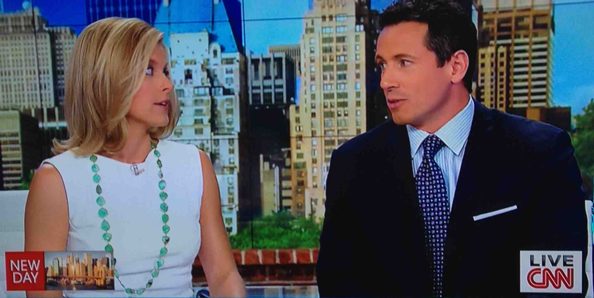 A sharp eyed viewer noticed that CNN has tweaked the set of “New Day.”

Originally, the background had dark gray structural elements that delineated the backdrop into “panes” — enhancing the illusion of a large loft-style window.

As you can see from this photo, taken from the show’s debut, the lines were thick enough to stand out even from this wide shot and also included two thicker horizontal bars one panel in from the left and right. The new look, shown at the top of this post, eliminates the structural framework and allows the near bezel-less flat panel screens to create an almost seamless span.

The studio already boats a 3×3 video wall to the left of the home based, which is often used for weather, teases and standups: Could producers be planning to do more with the main anchor video wall and wanted the flexibility for it to not always appear as a window? The new configuration certainly allows for that (and, of course, faux window “trim” could always be incorporated into the colorized New York City skyline graphic used).