Awkward singing, split screen create one of the oddest tosses ever 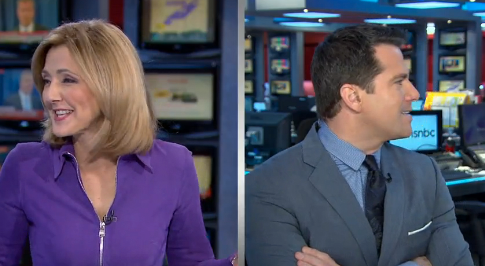 It wasn’t just Thomas Roberts’ falsetto singing that made a toss between him and Chris Jansing awkward.

As Jansing’s timeslot ended she, as with many MSNBC programs, tossed to the next anchor in a split screen, in the case Thomas Roberts.

The two then engaged in some friendly banter where Roberts expressed disappointment in not being included in Jansing’s “Sound of Music” segment earlier — he apparently had played Friedrich in eighth grade — and treated viewers to a very high rendition of “Song Long, Farewell.”

So … that was strange enough (or, as Jansing put it, “the weirdest thing you’ve ever heard”), but adding to the awkwardness was the fact that Jansing and Roberts, shown in split screen but in reality seated relatively close to each other, turned to face each other multiple times.

Their positions in the studio, however, didn’t match the split screen arrangement so they ended up appearing to be facing away from each other — and looking off either side of the screen.

Then again, after that performance, you probably wouldn’t want to look your coworker in the face…