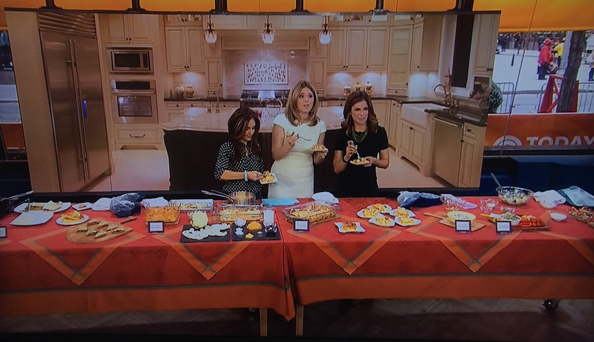 The kitchen set, one of the hallmarks of breakfast television, has gone virtual on “Today.”

Of course, “Today” has a functioning kitchen area on the second floor of Studio 1A that was added in the 2006 renovation and left mostly untouched since then, including during the most recent overhaul. Also near the kitchen are a windowed corner equipped with a large flat screen (that is sometimes used for Kathy Lee and Hoda’s hour) and an area with faux windows and printed graphics that’s often used for fashion segments.

It’s also common for the show to do food oriented segments in other areas of the studio, especially the “Production Area” on the first floor or outdoors on the plaza.

Typically these locations are used for segments that don’t require “heavy” cooking (we’re using quotation marks here since TV cooking is typically so staged) — when the food requires minimal heating or can be prepared on a portable burner, such as the one Monday where “Today’s Take” hosts learned how to make healthier version of comfort foods. The segment, which took place in the Production Area, used the segmented flat panel video wall, joined together as a single unit, to show a photograph of a kitchen behind the hosts and guest.

The kitchen in the image features light wood tones and sleek stainless steel appliances, making it look similar but not identical to its real counterpart upstairs. “Today” has been utilizing the video wall for a variety of uses, including showing topical bullet points, tosses to live shots or full screen image such as the one used in this segment. This feature of the set was a particularly smart move since it allows producers to create an almost unlimited number of unique looks by adjusting the lighting, furniture arrangement, video wall configuration and graphics shown on it.

Sometimes, however, the use of the full graphics ends up looking a bit cheesey — similar to how a chroma keyed background looks.

Instead of the photo background, one idea is that the video wall could have been used to show names of ingredients or caloric information about the dishes, perhaps in combination with some topical imagery, so the wall was serving dual purposes.