Reinventing a television station in the middle of Alaska 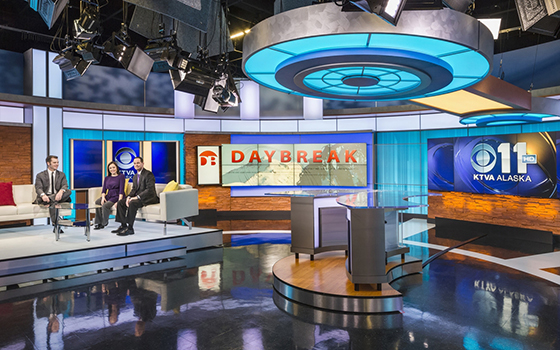 Devlin Design Group contributed this story about the recent set installation at KTVA-TV in Alaska.

This is a story about a group of scenic artists with a 23,000 square-foot blank canvas, a long sea voyage, an adventure in a far-away land, and all within a time frame that would frighten the writers of “24.”

In December, 2012, Alaskan Telecom Giant GCI was in the process of seeking FCC approval to purchase Anchorage CBS affiliate KTVA-TV. Their goal: reinvent and rebuild an entire television station on a nine-month timeline.

The reinvention they sought was not only philosophical, but included rebuilding the current television station in what was then a vacant, newsprint warehouse and deserted office space.

Denali Media Holdings, a subsidiary of GCI was in the charge of the project.
One of the first calls they made was to Dan Devlin, someone they knew they could trust to spearhead the entire process.

His company, Devlin Design Group is well known in the broadcast industry for their award winning and forward thinking news set designs. But this project went far beyond the design and installation of a news set. Devlin didn’t blink. As an artist, he saw this as an opportunity to execute on a grand scale—a blank canvas, thousands of square feet in size.

But unlike Michelangelo’s Sistine Chapel, this space required more than paint and plaster. The project would require a sophisticated design meant to redefine KTVA-TV’s brand and enhance their storytelling and presentation. Add to that a measure of concrete, steel infrastructure, miles of digital cable, and all of the high tech equipment required for Alaska’s first television station to originate and broadcast high definition programming.

It was an exciting challenge…especially knowing there were few, if any companies out there with the resources to pull a project of this scope together—from conception, to construction, through systems integration, to scenic design and execution.

Within a week of being asked to coordinate the rebuild, the folks from Devlin Design Group and GCI flew to Atlanta to meet with TI Broadcast to brainstorm the strategy to create the new KTVA-TV. The clock was ticking.

The decision was made early on to move the existing television station into vacant office and warehouse space of the Anchorage Daily News. The extra space was needed to accommodate a staff that would soon swell to twice its current size.

Shortly after the strategy session in Atlanta, demolition was underway and walls were going up in the first phase of the project: building the newsroom, master control, graphics area and station administration offices on the second floor of the building.

Soon thereafter, demolition crews began gutting parts of the newspaper storage warehouse below the newsroom and the transformation was underway to convert this vast, empty space into the most sophisticated, state-of-the-art television news presentation area in Alaska.

But before that could happen, there were a number of challenges to overcome. One of the first was the inability of the existing roof to support the lighting grid.

The team came up with an interesting solution. It was decided to build a “building within a building,” augmenting structural steel to the existing framework that would support and sustain the construction of a new studio lighting grid and distribution system.

The project was gaining momentum, and early on, there was a growing, but unspoken thought, that the design, construction and installation might actually come in ahead of schedule.

Concurrent with the demolition and construction going on in Alaska, work was already underway at the DDG scene shop in the lower 48 on the scenic backgrounds for the set and newsroom. But how to get all the high tech and scenic components from the interior of the continental U-S, to Anchorage?

The folks at DDG came up with an interesting solution. They filled two, full sized cargo containers and sent them to the Port of Auburn, WA, where they were loaded on a container ship for the voyage to Alaska.

One of the more interesting aspects of the design of the new station was the plan for the second floor newsroom and offices. Everyone loved the fact that this intuitive workspace was flanked by 180-degree views of the surrounding Alaskan landscape.

But the windows that allowed the breathtaking vistas, also spilled uncontrolled light ranging from blazing sunshine to arctic nightfall onto the proposed on-air newsroom. The DDG team invited Roscoe & Crestron Control Lighting to the party. The successful result was a controlled broadcast lighting solution for the newsroom windows.

By late July, it was clear that the project would come in ahead of schedule, and launch preparations were well underway in August.

And then something happened as uncontrollable as an Alaskan avalanche–the U-S Government shut down…and with it, the FCC approval process.

The decision was made to push the launch back to December with the hope that the gridlocked government would be re-opened by then.

The team at KTVA-TV used the delay to their advantage. In addition to rehearsing their state-of-the-art news environments, they also had to deal with moving into a new space…and the November Sweeps. It all paid off with the flawless launch of the new KTVA-TV on December 2nd.

KTVA-TV is already challenging the long standing market leader with their stunning new design and fresh approach to storytelling.

KTVA-TV General Manager Gary Donovan couldn’t agree more…“The dazzling set designed by DDG jumps out of the screen and sits on the couch next to you.”

The project broke new ground for broadcasting in Alaska by creating that state’s first HD station to create and broadcast high definition content.

The KTVA-TV project also initiated a new era for Devlin Design Group which clearly expanded its proven expertise in design and installation, from the studio to the granular details of creating an entire television station.

The entire DDG Team was immersed in this project…entrusted with all details of artistic design, systems integration, and creating a new tech, high tech intuitive workspace.

Dan Devlin and his team would be first to tell you that it’s very cool to be in a position to integrate the ownership’s vision into everything from the ground up…from work space construction to the design and debut of a stunning set. Cool as Alaska in December!

Devlin Design Group is an advertiser on NewscastStudio and contributed this article for publishing.