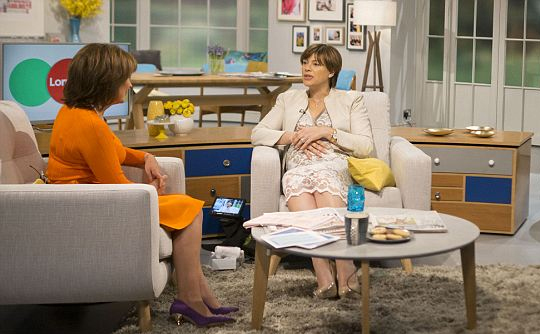 With the demise of ITV’s “Daybreak,” sister show “Lorraine” was left looking for a fresh start.

Lorraine Kelly has been apart of ITV’s breakfast lineup since the original “Good Morning Britain” aired. Her chitchat show “Lorraine” followed “Daybreak” since 2010, and had a similar set design and graphical look.

The new graphics package builds on the shows previous use of circles, adding more… and with social media (as seen in the opening).

View a gallery of the new Set Design and Graphics The graphics use bright pops of colors with a stark white background. During the show, the flat circle design really works. The “Lorraine” set has a homey feel, mixing clean design with some Mid-century furniture. Along with an interview area, the set includes a kitchen and dining room area.

The “Lorraine” set captures a modern home, and while a bit busy, looks good on air.