Christie behind the largest screen in Spain’s news programmes 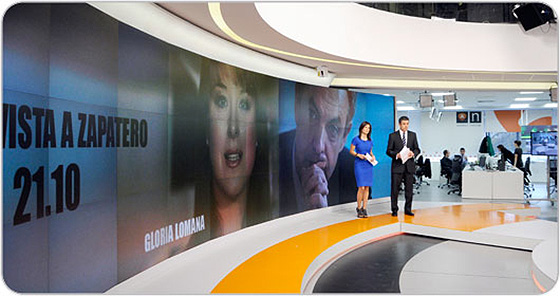 Antena 3, the Spanish TV channel, is revolutionizing newscasting with its brand new studio and original broadcasting style. The new set for the Antena 3 Noticias news programme, in preparation since the summer, debuted in January with a primetime interview with José Luis Rodríguez Zapatero, President of the Spanish Government.

The new studio is spread over an area of 1,200m2 and is equipped with groundbreaking technological resources including a production system unprecedented in Spain.

The most visible and striking element of this new studio set is a giant 11m x 2.5m rear projection display made up of thirty-three 50” Christie Entero LED tiles with SXGA+ resolution, built on proven DLP technology with LED illumination. This is the biggest display of any news programme in Spain and one of the largest in Europe. The videowall was installed jointly by Christie and Videoreport, a company belonging to the audiovisual group Vértice 360, and a Christie partner in Spain.

“The idea was to create a different news bulletin, opening a window on the world through a giant display with superb quality image as the centrepiece of the new set, that would also be used as a backdrop for the news bulletin,” recalls Jesús Lozano Corchón, Director of Image and Production at Antena 3.

“We were looking for a curved display, because this type of screen is more attractive from a visual perspective. We also wanted an image with the smallest possible seams between the cubes. We required a silent display solution giving off the least heat, because this screen was to be located in studio space with 150 people, given that the Antena 3 Noticias newsroom is part of the set. We also needed a display with outstanding brightness, considering the strong effect on the set of both the sunlight coming from the street and the artificial light. As such, after weighing up all these factors and studying other options on the market we concluded that Christie offered us the best solution”.

Antena 3’s modular display is made up by Christie Entero cube units based on LED illumination and featuring 1-chip DLP technology, and specifically designed for control room and videowall applications. There are no consumable components such as lamps, dust filters or colour wheels that need replacing, offering excellent 24/7 performance with SXGA+ and WUXGA resolutions.

“The news department and the journalists themselves from our newsroom are greatly surprised by the quality of the display and the endless possibilities it opens up for presenting the news,” points out Jesús Lozano. Meanwhile, Julio Chorro maintains that “this display is a talking point within the sector. We have been praised for this change of image, but more importantly is that our client is satisfied with the end result. This is currently the news bulletin offering the most incredible image of all those broadcast on TV,” he concludes.