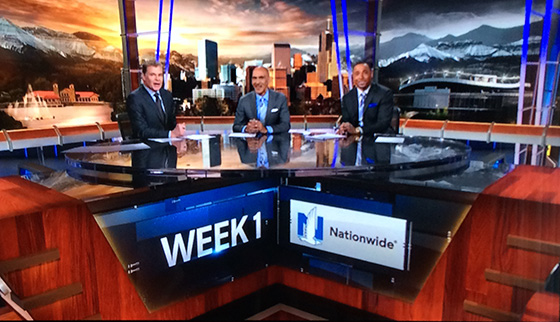 This year, the show moved to NBC Sports HQ in Stamford, Connecticut, and debuted a new studio by Jack Morton PDG with lighting design by Ferri Lighting Design & Associates (FLDA).

“We have an insider’s view of the NBC Sports facility, and found it a rewarding challenge to light the new ‘Football Night In America’ set, leveraging what we had originally designed,” said Bruce Ferri, senior designer for FLDA. “The NFL is a significant part of the NBC Sports portfolio, and the new lighting reflects this, in our view.”

The ‘Football Night In America’ set takes advantage of what is the largest all-LED broadcast studio configuration in the industry. The design has created an energy-efficient operation for what are now the home of NBC Sports and NBCSN, encompassing four studios and one newsroom.

The FLDA team on the ‘Football Night in America’ project included: