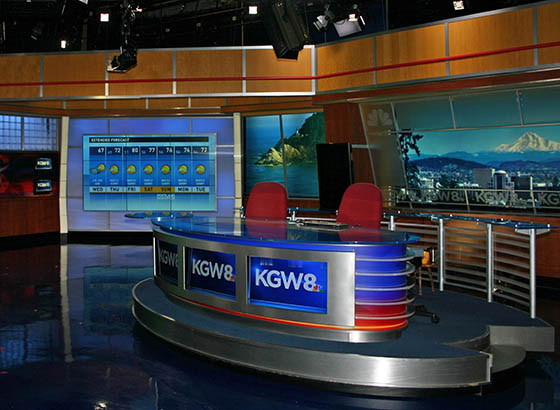 “Between the lighting and the new Planar wall, it feels like we have a new set,” said David Boyd, KGW-TV director of technology. “As expected, there were some concerns with the plan to pull out the proven incandescent lighting and install new fluorescent and LED lighting, but we were impressed with the professionalism of the installation and the finished product.”

Close to 120 incandescent lights were replaced with a mix of 68 Brightline fluorescent and LED lighting instruments, which are controlled via DMX using the station’s existing ETC lighting console. The studio is lit with daylight balanced instruments to match shots from the station’s downtown studio, which features a background with wall-to-wall windows.

“It looks much better than what we had before. The set has more lighting texture and more depth of field,” said Boyd. Fluorescent lights were used for the set’s base lighting because they “provide more cubic dimension of light cover at a lower cost than what we could do with comparable LED technology,” explained Joe Cervone, Brightline sales manager, who was part of the ABS installation team. “Fluorescent allows us to get the full set lit and then we sculpt with LED.”

The set design was updated with a new video wall that displays graphics and video backgrounds during show segments. The Planar Clarity Matrix system was installed by the station and replaced a RP screen that lost its “pop.”