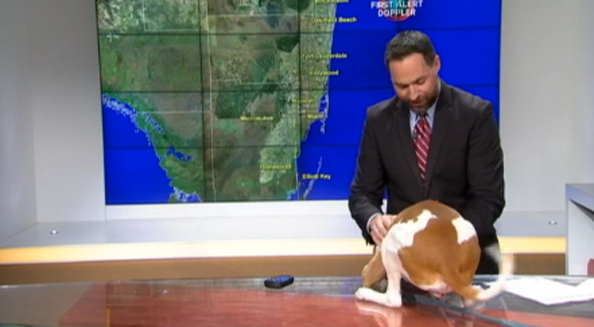 We all know the expression “raining cats and dogs” — and apparently an American Bulldog mix named King had heard saying too.

King, who was appearing on WTVJ-TV, the NBC O&O in Miami, as part of the station’s pet adoption segment, just couldn’t wait his turn and decided he would help out with the weather.

Meteorologist Ryan Phillips was live on air giving his normal weather update by telling viewers “over the course of the next few days, right before Thanksgiving, we close the complaint desk. But I’m going to have to reopen it,” he said.

That’s when King decided to jump up on Phillips’ desk and say “hello.”

Phillips reminded King that his segment was, in fact, in the next block and tried to continue his forecast: “All right, let’s just go to the map, so we can get him off of here in a graceful fashion,” he said, and the control room switched to a fullscreen map in favor of the video wall behind Phillips.

Phillips tried to complete his forecast, but it’s pretty clear he continued to try to wrestle King off the set.

The set where the incident took place was installed in 2012 and designed by Clickspring. The set replaced the station’s longtime PDG studio and working newsroom set, which was obscured from view during this update.