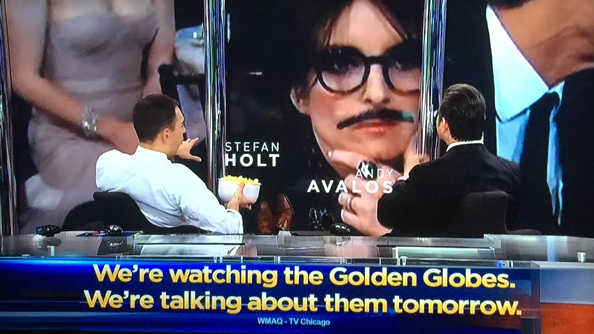 The design first appeared on WNBC-TV‘s set in New York City and was replicated at the Chicago station. A similar, though simplified design, is used at KNBC-TV in Los Angeles. NBC stations in Miami (WTVJ-TV) and Dallas (KXAS-TV), meanwhile, use horizontally-mounted low profile flat panel arrays behind their anchors.

In Miami, the array is wall mounted, while in Dallas it’s more of a freestanding design.

The promos, which were accompanied by the tagline “We’re watching the Gold Globes. We’re talking about them tomorrow,” also included a bowl of popcorn that the talent was snacking on.