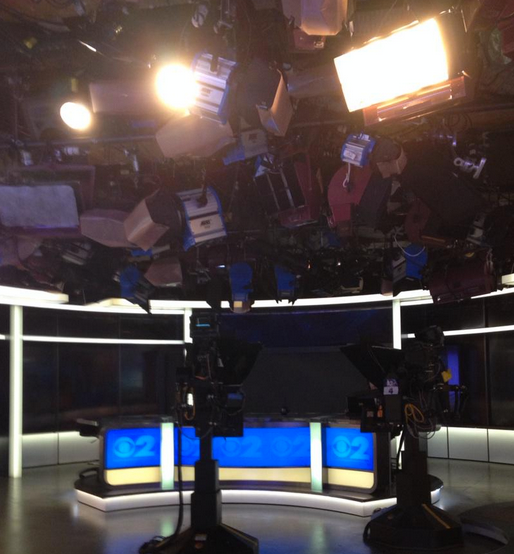 New York City‘s WCBS-TV suffered a power outage in its studio this morning that wreaked havoc on its power-hungry set.

As anchor Chris Wragge observed in a tweet: “A few lights work. Just not the ones we need.”

The lights that did work were mainly the accent lights on the set, including the internally lit columns, anchor desk and riser, as well as downlights on the knee walls.

From the photo Wragge tweeted, it appears the lights that didn’t work included the backgrounds — which are the parts that show up on air most. In addition, the projectors behind the camera center rear projection background were also KO’d. Co-anchor Mary Calvi tweeted out the shot above a bit later saying the lighting had started to come back.

In this photo, it appears at least one of the projectors has come back online.

The incident made for quite an exciting morning at WCBS-TV and also brings up a good point — with today’s sets becoming so dependent on internally lit and backlit elements and video walls, having a plan in place in the event of power or technical failures (or worse) like this is probably a good idea.

Alternatives could include simply continuing the newscast from in front of blackened backdrops or video walls (think “Charlie Rose”) or perhaps moving to an area of the set that still looks decent without power. Flashcam positions, assuming the power isn’t out there as well, are other good alternatives that stations have used in situations like this — as well as broadcasting from outside using remote production vehicles.