Cleveland reporter transports herself from outdoors to toasty studio 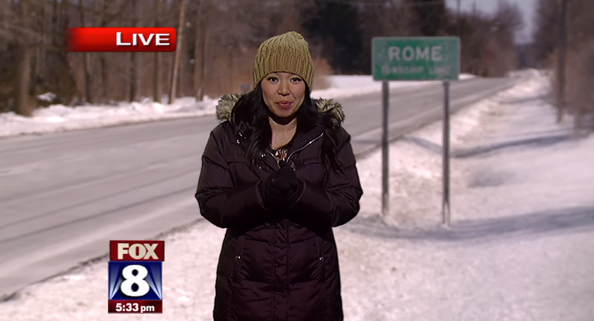 Apparently having run out of ways to emphasize just how cold it is, one Cleveland reporter used a bit of television magic to instantly transport herself from the -39 degree outdoors to the balmy studio in what was a rather stretched and contrived metaphorical standup.

Melissa Reid, a reporter at WJW-TV in Cleveland, started a live shot in front of a still photo of a snowy road and then, when she pointed out the temperatures were expected to rise to 32 degrees, the station cut to a wide shot of her, now standing in front of the green screen without any graphic, as she walked across the studio to the anchor desk.

To complete the effect, Reid also donned an appropriate costume — a winter jacket and hat, which she removed once she was “back” inside the warm studio.