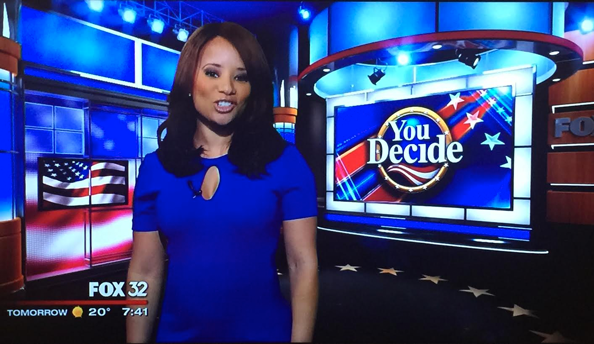 WFLD-TV, the Fox O&O in Chicago, opted to use a chroma keyed background for its election night updates Tuesday.

The station was doing brief cut-ins during primetime programming to update viewers on the results, with a focus on the city’s mayoral race, and opted to have its anchors standing in front of a green screen with a 3D environment keyed in behind.

That design included a circular header element with faux video wall beneath that was sporting a “You Decide” graphic. The other side of the environment included what appeared to be some panels with an American flag motif, while a circle of stars was visible on the “floor.”

Overall, the look came off as being blatantly virtual, thanks mainly to the odd disparity in scale between the anchor and background, as well as the lack of depth in the scenery and, especially, the graphic on the “video wall.”

WFLD-TV, a perennially low rated station, has been experimenting with a variety of tweaks to its on air look of late — including modifying its main anchor background last year.