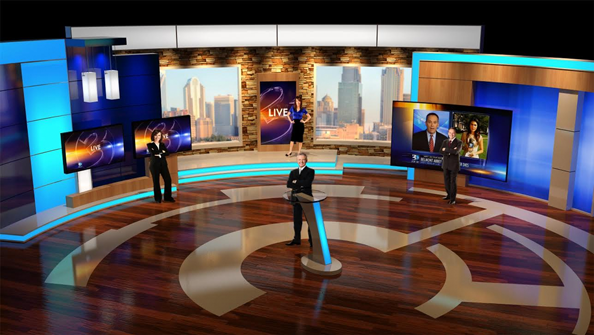 FX Design Group added this virtual solution in the beginning of its design planning stages. Mack McLaughlin, CEO and creative director of FX advises that “having the two versions – hard set and virtual set — give stations the utmost in technology in preparing for the future and the best in flexibility for the ever-changing broadcast environments.”

“Our shared mission, with FX and Hybrid, as we brought the virtual set on-line, was to blur the lines between real and virtual, so the viewer experience is enhanced well beyond what any station can do with a hard set alone,” said Dennis Milligan, the station’s news director, in a joint statement issued by FX Design Group and Hybrid. “This effectively doubles the creative space available to producers.”