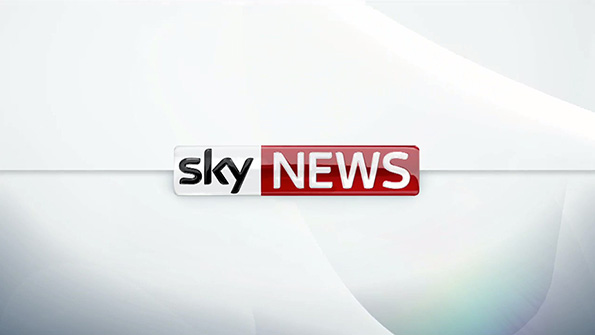 Sky News’ election graphics were only the first piece of a larger update for the network, which is now live across the network.

The new design, created in-house and powered by Vizrt, dumps the over-the-top 3D effects in favor of a flat design with some glossy elements. The look is simple, but with many transitional movements.

The top of the hour graphics still include a look at the Sky News website, which transforms from desktop to mobile through a series of sleek animations, ending with the networks logo.

Top of the Hour Opening All of the branded shows, such as “Sky News Tonight” and “Ian King Live” have a standardized title graphic of text on top of a blue background, which matches the updated website header. The various insert graphics have also been shrunk and simplified. The new text is almost too small, especially with the ticker below: Overall, the updated look is an improvement as it sheds the unneeded 3D, focusing on simple motions. Some refinement is needed in the text presentations to perfect this look for Sky News.