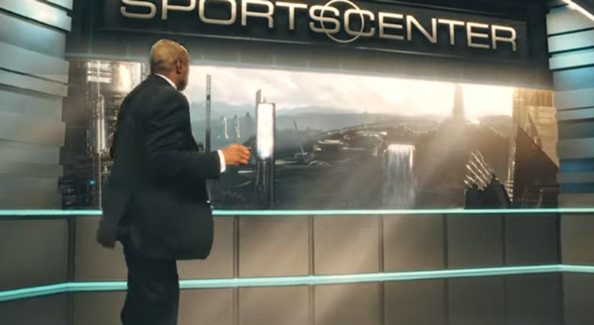 ESPN‘s “SportsCenter,” as part of an advertising deal cut with corporate cousin Disney, will air a special commercial that features an ESPN anchor becoming part of the flick “Tomorrowland.”

In the piece, which will air right before the show goes to a normal commercial break, anchor Jay Harris is shown walking along minding his own business when he notices a pin on the studio floor.

Touching it transports him to “Tomorrowland” — or at least the Tomorrowland he can see from the “SportsCenter” set.

The whole pin-as-a-transporter element is a key plot element in the film, which also provided additional 3D footage used in the spot.

ESPN is quick to point out that it isn’t trying to trick viewers — the segment is placed right where you might normally find a “broad to you by” announcer.

Indeed, an off-screen voice says “SportsCenter is brought to you by Tomorrowland” toward the end of the spot, which concludes using a much more traditional movie trailer card that includes the credit block.