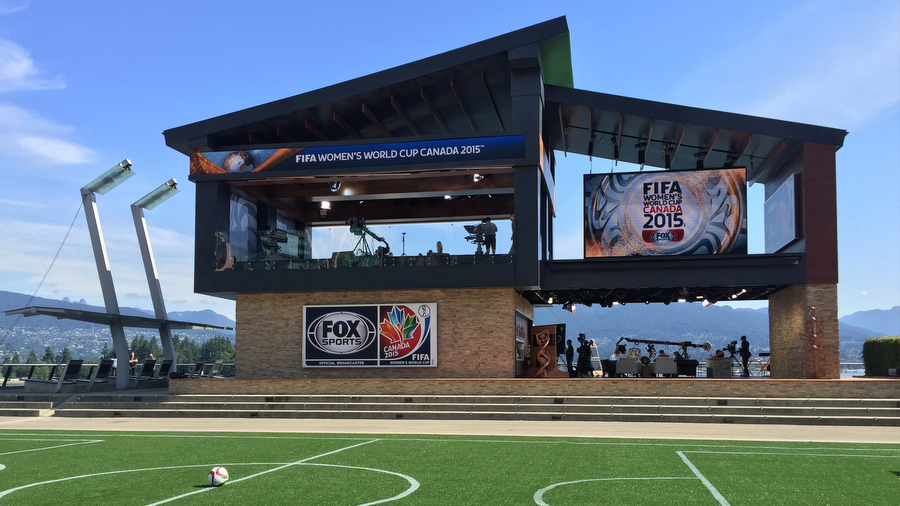 The FIFA Women’s World Cup kicked off from Vancouver this week with a large presence from broadcast rights holder Fox Sports.

This World Cup is seen as a test run for Fox Sports, as it prepares for the 2018 World Cup in Russia. Technologically, Fox Sports has devoted many resources to the event with countless personnel on the ground in Canada.

One of the largest symbols of Fox’s coverage is its two story studio in downtown Vancouver, located next to the former Olympic flame in Jack Poole Plaza.

Designed by JHD Group, the scenic design for Fox Sports has drawn praise from soccer fans and the community for its mix of local flair and sustain design. “Vancouver is a vibrant destination that is filled with wonderful architecture,” said Jeff Hall of JHD Group. “The destination for the studio structure was to be constructed at the Vancouver Convention Center known as Jack Poole Plaza. Before surveying the site, we researched and discovered that the Convention Center has a unprecedented commitment to lessening Vancouver’s global footprint.”

With this in mind, JHD Group worked to create a mid century modern inspired structure that matched the architecture of the area while reflecting the communities environmental focus. To help gain a better understanding of the environment and surroundings, Hall took many seaplane flights around Vancouver, discovering the rooftops and geography.

“It was essential to reflect the dichotomy of Vancouver in the design that would ultimately be an extension of this unique property. This was defined on one side by the harbor, wildlife and nature while the other side was a modern city of glass. This structure was going to live and breath for 30 plus days on location so it had to belong and be authentic,” said Hall.

Set materials were derived from the local surroundings, with pine, maple and poplar woods used with flag stone walls and steel beams.

“The use of the clean lines associated with mid century modern architecture informed the importance between the textural relationships and how those textures play together and make modern harmony,” said Hall. Built as an open air studio, the space affords 360 degree views of the mountains, harbor and concrete jungle that is Vancouver. JHD designed the set with a rotating anchor desk to take advantage of the best views depending on the time of day, with no walls or covering obstructing the view.

The lower level of the space includes a lounge that features details from First Nations (the aboriginal people of British Columbia) art symbols along with “totems and textiles” that match the on-air graphics package.

“The ultimate goal was to embrace our local and make our temporary structure a permanent home for the most impactful soccer stage in the world,” said Hall.