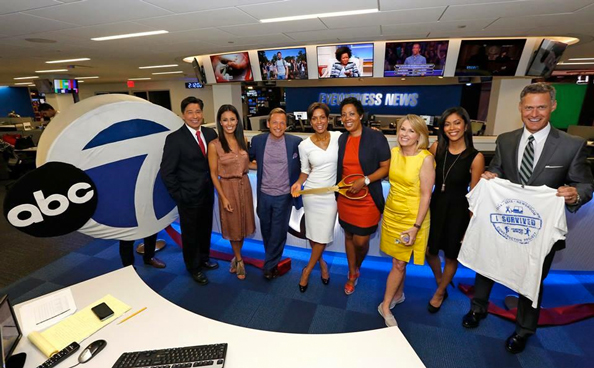 The network’s flagship station cut the ribbon on a freshly renovated and expanded newsroom last week and various reporters and anchors have been tweeting about their new setup.

A revamped assignment desk is crowned with a header featuring sleek flat screen monitors and the words “Eyewitness News” spelled it out in dimension letters across the rear wall while workspaces were updated with white desks and frosted glass dividers.

At a ribbon cutting ceremony last week, the station also handed up “I survived the ABC7 newsroom construction project” T-shirts to staffers.

The newsroom also includes a new flashcam position and updates the sports department and various other areas.

WABC-TV’s newsroom was previously used as an alternate news studio for the station’s “Good Morning America” cut ins and midday news back when the station shared a studio with Disney-ABC Domestic Television’s syndicated “Live” talk show.

Because of the timing of the production requirements for that show, including ushering in a live studio audience, WABC-TV couldn’t be in the space in the hours before and after “Live” so any news updates or newscasts in that timeframe originated from the newsroom.

However, since opening its streetside studio in 2011, the station has to share its news production space with “Live.”

The WABC-TV newsroom was also used as a temporary set after a 2007 fire on the main Eyewitness News set, which also knocked the “Live” set out of commission (“Live” originated from the set of the syndicated “Who Wants to Be A Millionaire” temporarily).