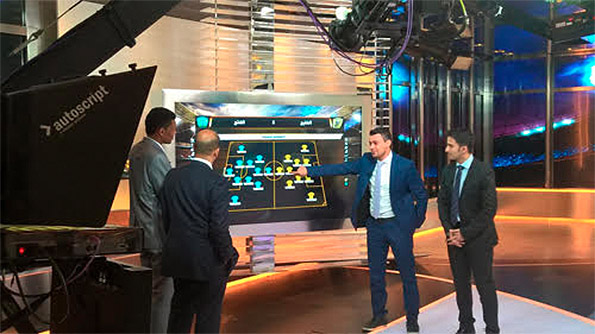 “This season we set out to revitalize the viewing experience for Saudi Pro League fans, and when we saw LaunchPad, we knew we’d found the ideal solution,” said Fadi Radi, head of graphics at MBC. “With instant access to real-time data, analysis tools and sleek 3D graphics in an intuitive touchscreen, it’s the ultimate storytelling vehicle.”

The LaunchPad touchscreen will play a key role in reviewing player activity, and will also integrate with MBC’s Vizrt Viz Libero software.

“LaunchPad gives our team the flexibility to get fans more engaged in the sport through analytics. Having worked with RCS for years, and experienced their track record in Vizrt integrations, we knew we could trust them, and they definitely went above and beyond,” said Radi.

MBC’s LaunchPad runs on Vizrt’s Viz rendering engine, a third-party touchscreen, RCS software and RCS’ cloud database DataCenter. The system culls data from Opta data feeds; sorts and organizes the information; and makes it accessible via the touchscreen. Leading up to the launch RCS worked closely with MBC on Arabic translations and built MBC’s existing graphics into LaunchPad scenes to ensure the graphics reflected its broadcast aesthetic. A second phase of development, integrating the system with MBC’s Grass Valley K2 Dyno video server, is already underway.

“MBC is a longtime client with a talented Vizrt graphics team willing to push the limits of technology to improve the fan experience, which contributed to the overall success of this project,” said David Peacock, project manager, RCS. “The integration of MBC’s Libero with LaunchPad proved seamless, and it was exciting to work with their team to broaden the range of competitions that LaunchPad now supports with the addition of the Saudi Pro League and three cup competitions.”