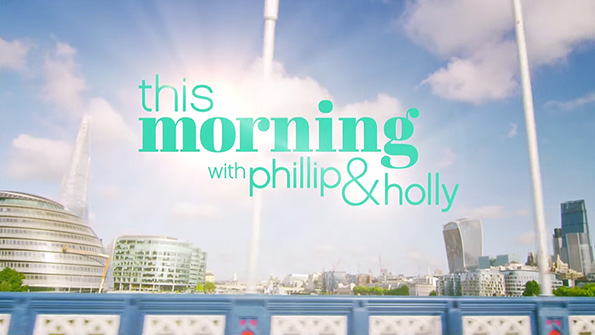 For the update, “This Morning” went with an open concept floor plan, with no divider walls, just one large open room with furniture strategically positioned for clean backgrounds. The set mixes a mid-century modern vibe with golds and pastels, creating a warm and inviting space.

Graphically, the show builds on the gold with the addition of teal. A new logo was also introduced. For the opening titles, hosts Phillip Schofield and Holly Willoughby make their way through London to the studio, stopping by various shops. At each stop, guests names are superimposed on the screen, giving a preview of who’s on the show, a similar effect used by many late-night programs. An updated theme from Sitting Duck, the same company behind the tunes for “Good Morning Britain” and “Lorraine”, debuted with the graphics. ITV also updated the outside of the studio building, adding show branding and graphics. The broadcast originates from Studio 8 at The London Studio, which overlooks the River Thames and provides roughly 3,000 square feet of studio space.