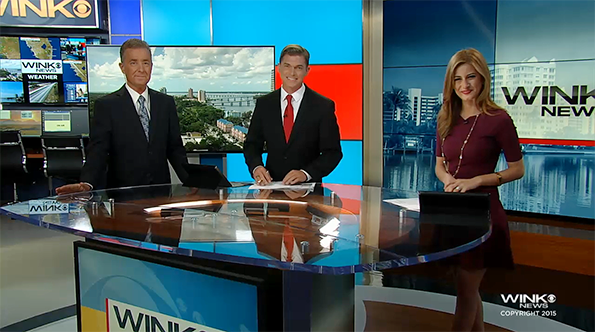 WINK-TV, the CBS affiliate in Ft. Myers, Fla., has debuted a new set from Broadcast Design International that draws heavily on rectangles.

The new set features a standing, two-person anchor desk placed in front of a 3×3 video array. On either side, rectangular backlit panels are equipped with color changing technology. As shown here, one of the main looks for the anchor video wall background is to place the station’s branding in a transparent white box overlaid over a stylized cityscape. It’s worth noting the layout of the screen design matches up with the video panels’ thin dividing lines.

Next to the set, the parts of the old weather center have been recycled into the new one, albeit with some key updates to technology. WINK-TV had used a set from Broadcast Design International for years.

The unique design included an off-axis control room dura background, a frosted plexi panel with the CBS logo and curved lines placed between the anchor and weather area and a faux second story. The new set is a move in a new direction with more technology and flexibility.