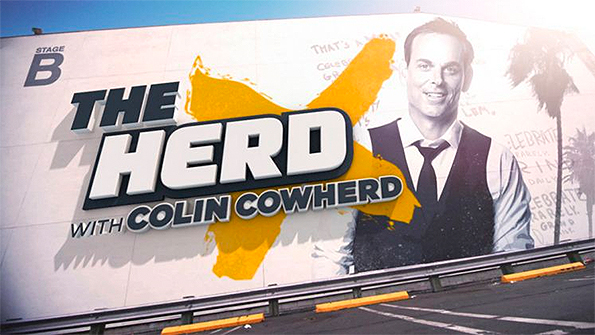 Colin Cowherd debuted his Fox Sports 1 show, “The Herd,” this week, part of his transition to the West Coast.

Cowherd formerly worked at ESPN, where he became one of the networks top personalities, making his thoughts known on most sports issues during a daily radio show and through various television platforms. During his first show Tuesday, Cowherd addressed the move to Fox and the commitment they’ve placed behind his show.

One of the most noticeable changes is his setup, which he joked was a “closet” at his former network home.

Working with JHD Group, Fox Sports created a sizable setup for “The Herd” at its Los Angeles broadcast center in Stage B, which is also home to “Fox Sports Live.” This investment is similar to other changes seen on the show, such as the increased staffing. The design of the setup aims to embrace the culture and lifestyle of Los Angeles, through its use of dramatic lighting and wood choices.

“The design was meant to evoke the club/lounge culture and establishing a visual language that will elevate into a lasting studio,” said Jeff Hall of JHD Group. The design includes a main desk that’s fronted with orange and white backlit boxes. A small couch and coffee table allows guests to join in-studio next to the desk.

An area for producers and technicians was also added to the studio, fronted by an interlocking wood design. The lighting sets an overall tone for the show and helps create the “club vibe.” Orange lights are strategically placed to reflect off wall elements, creating soft rolling backgrounds on-air.

While working with an existing studio as a base, JHD was able to create a unique space for “The Herd” to launch.