Q&A: Behind the design of ‘The Late Show with Stephen Colbert’ 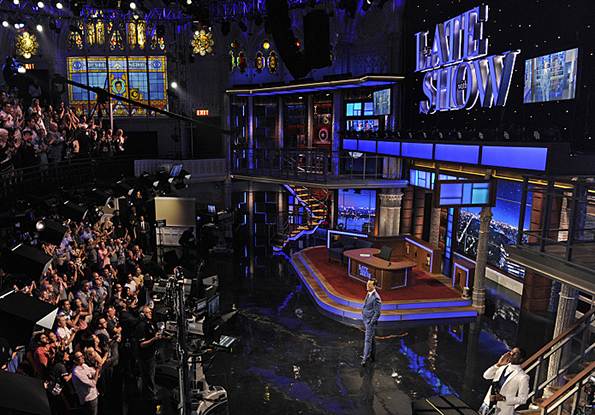 Stephen Colbert took over the reins of CBS’s “The Late Show” last week, marking the beginning of a new era for the network. As part of the change, significant alterations were made to the show’s home, the Ed Sullivan Theatre.

We recently had a chance to talk with Larry Hartman, senior designer on the project at Jack Morton PDG, about the changes.

Talk a little about the background of the project

Arriving at the scenic design was truly a collaborative process, that took months and many, many conversations with Stephen and his producers.

We really wanted to embrace the theatre architecture, so that the entire room could be a part of the on-screen environment.

What challenges did you face in this set design? One particular challenge was taking this magnificent, open volume and creating an environment that directs the focus on Stephen and his guests. We did this by creating structures that connected to the soaring theatre facade, but appear to naturally divide it and organize its impact into smaller areas. The downstage ends of the stage have naves with tall columns culminating in Gothic arches.

We added balconies on each side, essentially cutting the height down to person-sized levels. This not only helped to make the scale friendlier, but also doubled the playing space for a show that will continue to grow and experiment.

To manage the towering height of the proscenium, we created a canopy that runs horizontally across at about mid-height. The space above the canopy features an LED star drop that softly twinkles behind a large, dimensional show logo. The canopy nicely frames Stephen’s interview area and the performance space below.

Talk about the design process for a project of this scale?

The design process was even more intriguing since not only was the set being designed, but the very show itself was being figured out. Stephen noted that we were being asked to “create the arena” before the game is worked out. So flexibility and giving the show a playground that could evolve were important factors in the development of the design.

To this end, another powerful feature of the new set are the large LED screens incorporated in the scenery. These include Stephen’s backdrop, as well as a flying screen in the performance area, and vertical towers flanking the proscenium.

How would you describe the design style?

Overall, the set had to be warm and inviting, with an obvious late night vibe. We wanted to reinforce the grace and textured depth of the theatre architecture, but then compliment it with modern elements, like the wood and light boxes we introduced, and then juxtapose the grittiness of the backstage with painted brick.

There is certainly a nod to the feel of the Colbert Report, with color-changing light boxes and wood shelves featuring books and Captain America’s shield. The theatre’s period look features vaulted ceilings and stained glass windows. During the design process, Stephen mentioned wanting to find our own version of the stained glass, and we landed upon an almost Mondrian motif.

The rectangular colored patterns that accent the set are actually each separately controllable color-changing light boxes. Coupled with the LED displays and the rest of the traditional lighting rig, these “Mondrian light boxes” can re-skin the look of the set instantly. This will all be on display especially with the guest band performances.

What makes this set different from David Letterman’s?

There really wasn’t a substantial amount of thinking about how similar or different to be from the look of Dave’s set. We looked at all late night shows, present and past, to be informed about what is out there. But the driving force was always what will make the set right for Stephen’s show. One exception came from Dave himself.

Stephen spent some time talking with him and asked him about the theatre and his set. Stephen asked Dave what, if anything, he would have done differently. Dave replied that he would have probably flipped the sides where his desk and Paul’s band played. So Stephen took that to heart and laid out the set that way. Beyond that flip in layout, the most obvious differences are that Stephen’s desk has been pulled downstage and angled toward the center of the audience.

The goal was to bring Stephen as close as possible to the people in the seats. He loves performing and wants to be as engaged with the audience as he can be.

The theatre was renovated by an amazing architectural and construction crew, supervised by the show’s producers. The theatre is now much more open and a part of the show look.