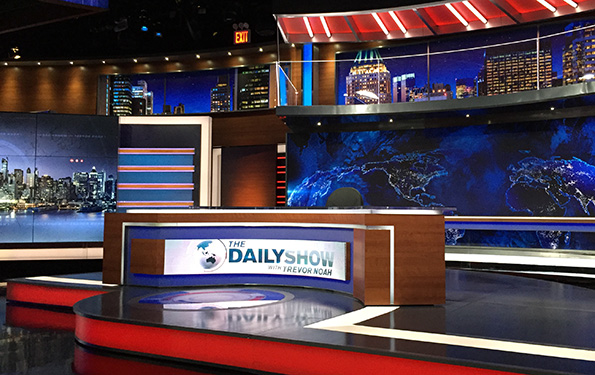 Comedy Central’s “The Daily Show” refreshed its studio with the debut of Trevor Noah, striking a balance of new and old.

Working with Jack Morton PDG, the broadcast aimed for something familiar while enhancing the shows coverage ability.

We recently had a chance to talk with Jack Morton PDG’s Larry Hartman, who led design on the project with Jim Fenhagen, about the scenic design and its evolution from the Jon Stewart era.

For Jack Morton PDG, this set represents a continued evolution of its partnership with “The Daily Show,” having worked on the previous set along with other Comedy Central projects.

“Trevor was very thoughtful when describing ‘The Daily Show’ set and what he imagined when considering the new design. He really liked the existing set, saying that it felt familiar, like home,” said Larry Hartman of Jack Morton PDG. Noah wanted an evolution of the previous set design, while being careful to not startle the audience with too many stark changes.

“Jon’s set really informed this new one. The goal was to create something warm and familiar yet also forward-thinking and flexible.”

To help maximize the re-design potential, the layout of the studio was altered, rotating the set and creating a larger venue for the design.

“The show’s director and producers really wanted to shake up the layout of the studio as well, so it was a perfect assignment. They wanted to encourage new thinking and approaching the show from a fresh perspective. Changing the ground plan would inherently do this. So we basically rotated the set 90 degrees clock-wise in the space. This opened up the length of the studio and allowed us to create large open playing areas. We also had new audience seating built as a result.”

“The set needs to play it serious, so that the jokes stand out even more,” said Hartman. “The Daily Show is a reflection on the news networks, so it needs to look and feel like a typical news studio. That was true with Jon Stewart. That is true now.” The design draws inspiration from news set elements, such as the header, glowing columns and balcony, while also being unique to the show and its history.

“One goal of the new design was to make it more flexible, with large areas for musical performances, round table discussions, green screen antics….whatever the writers can come up with. The show has a full arsenal to match the news networks they will satirize.”

One of the larger pieces of the set is a skyline backdrop that helps establish place. Wrapping around the background, the graphic puts the set in the middle of Manhattan.

“That is very interesting. I don’t think that we intentionally made the skyline a focus. What we wanted to do was make the set feel like an architectural place. The upper windows give us a sense of location, cementing the idea of ‘Comedy Central’s News Headquarters’ in New York.’

Place is also set throughout the set by many maps and world references, which culminate in the sets large header element.

“One of the consequences of turning the ground plan, was that the length of the studio is maximized, with expansive space on either side of the desk position. But we wanted to make sure that the focus remained on Trevor and his home base. The ceiling element helps to do this, becoming a visual anchor in the center of the studio.”

“Generally, we have found that the best location to put an overhead element is actually directly over the talent position. All of the key lights, back lights and fill lights play out and around that center location, but never right above.”

“When we designed the previous Daily Show set, it was in 2007. So a lot has changed from the technology side. The light boxes on the previous set were all lit with dimmable fluorescents. Everything on the new set is powered with LED tape. This has enabled us to make slimmer, irregularly-shaped light boxes that have color-changing capabilities.” The set design includes three monitor walls, an RP screen and a curved array of 2.5mm LED tiles on the desk face. These walls create new opportunities, including for the various in-show gags.

“The Daily Show” wouldn’t be what it is without the correspondents, live from remote locations around the globe, or in this case, in front of a green screen in studio.

“One of the cool things that ‘The Daily Show’ does, in addition to using a traditional fabric green screen sweep, is to project green into their large displays to make them key-able backgrounds. Their team figured out how to use the monitor walls as green screens as well, in spite of the thin bezels of the monitors getting in the way. So now, the show has essentially four electronic chroma key surfaces, as well as a traditional fabric one.”

Along with the new monitor walls and touch enabled displays, the show also moved to Orad to drive all the displays.

“They are just getting started, but in time, they will really be able to stretch their legs and do some amazing things with that technology,” said Hartman.