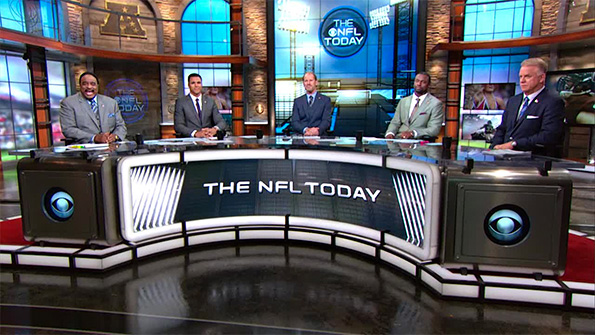 CBS kicked off football season this year with a new home for “The NFL Today” and the “SEC on CBS.”

Originating from the CBS Broadcast Center in New York, the set is located in Studio 43, which has housed the network’s NFL coverage for nearly 15 years.

The previous design, which debuted in 2006 and saw multiple small updates, had become “tight and claustrophobic” on air, not allowing producers the freedom needed to meet the changing expectations of viewers.

“I think fans or viewers are becoming very visual now and are expecting elements that enhance the story,” said Harold Bryant, EP and SVP of production at CBS Sports. “It’s all age groups now that expect graphics and video.”

CBS Sports laid out a series of goals for the revamp that would help enhance the broadcasts storytelling ability for the new season. These goals included making the set feel large and open, incorporating New York better and creating multiple areas for talent to utilize during broadcasts.

Jack Morton PDG was chosen for the project after a pitch process, with Andre Durette leading the broadcast design.

“After walking the space, the grid has this amazing catwalk system which helped inspire the industrial loft like design,” said Durette. “I wanted to make it feel like a NYC downtown loft meets W Hotel.” While the previous set had a sleek and glossy feel, the new set captures the industrial spirit, echoing a “prewar SoHo” loft with exposed brick, stonework and warm wood tones.

“This is a big and different departure from the previous look. The materials help tie in with the more raw and organic feel of football,” said Durette. Due to budget constraints, Durette had to work within the original architecture of the existing set, incorporating the new design motifs and technology requirements.

“That was a challenge in this project, making the same space we’ve always used feel big,” said Bryant.

“Luckily we already had those arched windows in the design which helped give us this loft like approach,” said Durette. “We stripped down the existing columns to their steel structure and added some wood, painted the floor to feel like polished cement and created a large video wall.”

To give the studio that “wow moment,” a large video wall was created in the center of the studio, extending from floor to ceiling.

“It gives them this dynamic presence in the space,” said Durette. “We then added moving monitors on the sides of the set, which are mainly for sponsorship placements.” The sets interview area was also updated with a new platform, table and chairs.

Since the studio is used for multiple shows across college and professional football, flexibility was key.

The monitors located around the set are all moveable, allowing them to track for various broadcasts.

The desk is also changeable with side wings that can be removed based on the talent setup of the particular show.

“I wanted the desk to tie into the industrial look but also have a big presence and cool dynamic shape with a large video screen,” said Durette. “By adding red to the platform it helps make it pop on the cement floor and helps tie into the logo of the shows.”

This flexibility also extended to the show itself.

“Studio shows over the year have begun to drag,” said Bryant.

With this in mind, “The NFL Today” has changed its blocking this year, with the show utilizing more areas of the set with more in-show movement. “We’re going to start with the guys standing, at a monitor or maybe a matchup board or something with the story they want to hit on. Hopefully it will make the show feel fresher and faster,” said Bryant. “Our graphics department is loving this challenge for them.”