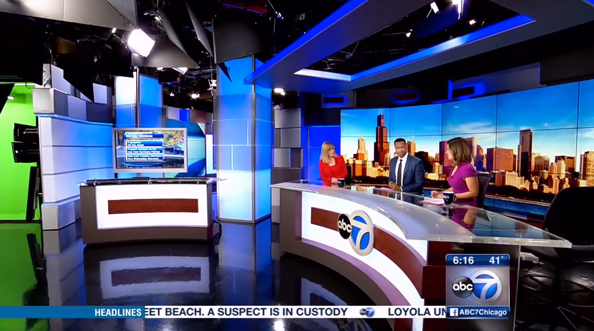 Chicago‘s ABC 7 WLS-TV debuted a new set Saturday that leverages the rectangular elements and color hues in its graphics package to form a cohesive and polished look.

The set is dominated by a large, gently curved anchor desk positioned in front of a 7 × 3 video array. To match that curve, the outer two segments of the video panels are tilted inward on both sides, with the third segment tilted just slightly, with the rectangular shape of the monitors used to create the video wall the first sign of the rectangle as a design element.

The set, designed by Jack Morton PDG with Joe Lamberta serving as lead designer and fabrication by Blackwalnut, is situated along State Street in downtown Chicago and also featured windows overlooking the sidewalk.

The anchor desk is fronted with a band of wood-toned strip and the ABC 7 logo and, suspended from the ceiling above the anchor desk, a thick rectangular frame.

Mounted high on the wall behind above and behind the video array are smaller dimensional rectangles with blue accent lighting.

Meanwhile, separating the anchor area from the weather center is an internally lit column built to hide a structural column. The middle section of this column features translucent rectangular panels arranged in a masonry-like pattern.

That enlarged masonry theme using rectangles can also be found in the solid wall behind the weather center and other areas of the set.

Another recurring theme of the new set is the use of silver-toned monitor frames rather than the out-the-box black found on the previous set.

The station’s graphic package, which debuted about two years ago, uses silvery and glass-like rectangles as a dominant element, so the rectangular and silver-framed on-set monitors is another nice touch and connection to the graphics.

The studio floor also mirrors the silvery rectangular theme through the use of gray thick outlines of rectangles adhered to the surface. In addition to the anchor area, a smaller area off to one side of the set is used for traffic reports in the morning hours and can also double as a standup area. This portion of the set is equipped with a single touchscreen camera center (no longer branded as the “Big Board”) flanked by two smaller flat panel monitors.

This area features a light gray, slightly curved background and one of the floor markings. An additional flat screen array is also included on the set as a multipurpose standup venue situated in an alcove behind the weather center. The area is also used effectively to toss to live shots, as shown here. The graphics used here Monday were framed in the familiar silver rectangles with hints of blue showing through on the sides. That same frame motif is also used on some of the OTS elements at the main anchor desk. While the station still does use traditional OTS graphics that are overlayed over the camera image, larger, rectangular graphics are also fed to the video wall, appearing to be floating in front of the cityscape background.

The new weather area, meanwhile, gives meteorologists access to a working desk that’s fronted with a narrow strip of wood-toned material just like the main anchor desk. The pod’s sleek glassy surface also mimics the look of the anchor desk.

A new addition to this area is a touchscreen monitor. Some additional monitors are mounted to the header of the set behind this area as well as large translucent panels with subtle weather branding.

Meanwhile, on the opposite side of the studio is an interview area that’s dominated by the rich wood tones and vertically-mounted flat screens. A large dimensional logo sits atop a transclucent panel while a backlit strip runs horizontally about midway up the wall. On camera right, the wood changes to the silver-gray color tone that’s accented with blue lighting. Some depth is added through the use of rectangular “bricks” that jut out from the wall, made from the same silver-gray material as the wall behind them. For seating in this area, the station opted for shiny white chairs. Overall, the set also remains true to the blues found in the station’s graphics package, mainly accomplished through the use of accent lighting or internally lit units. Other colors include a dark wood tone reminiscent of that used on the station’s old set as well as clean white and gray.