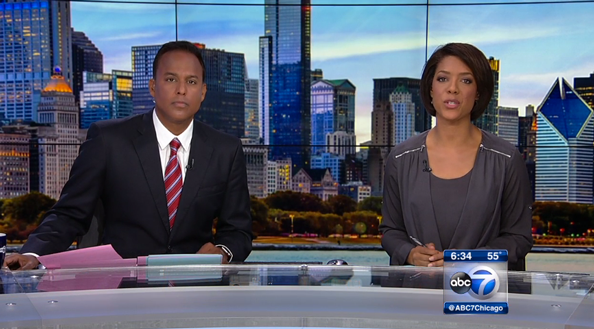 The main anchor desk location has been shifted, with the weather center being completely relocated. Sports now originates from the camera right side of the set, while camera left is used for weather.

The set is equipped with some 44 video monitors. WLS-TV’s new set was designed by Jack Morton PDG with Joe Lamberta serving as lead designer and fabrication by Blackwalnut.

The main anchor background features a large video wall with a gently curving, internally lit anchor desk with glass top. A similar design is used at the weather presentation desk. The video wall is used to display a stylized cityscape as well as animated topical graphics between the anchors that appear in front of the background image. A slick animation is used to transition from the standalone cityscape to the graphic box. WLS-TV, moved to a temporary set in August, then switching to a slimmed down and relocated version of its former set. Back in 2013, the station rebranded to “Eyewitness News” and unveiled a new graphics package.

NewscastStudio will have an in-depth look at WLS-TV later this week, along with more imagery. Stay tuned.