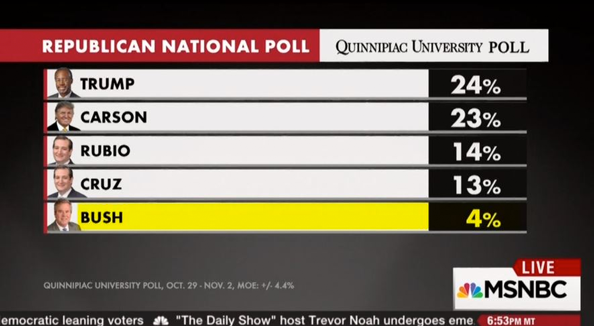 MSNBC, a network that likes to fancy itself diverse and racially sensitive apparently thinks all Hispanics look alike and can’t tell the difference between Donald Trump and Ben Carson.

During a report on a Quinnipiac University poll of GOP presidential hopefuls, the network used two photos of Ted Cruz, who is half Cuban, in both his line and the line for Cuban Marco Rubio.

The two photos of Cruz appear to be identical, though one is slightly rotated for some reason.

If that’s not bad enough, above that, graphics team also managed to flip Donald Trump and Ben Carson’s photos.

Mediate reports that the network aired the graphic a bit later with Rubio’s photo corrected, but Trump and Carson still flipped.