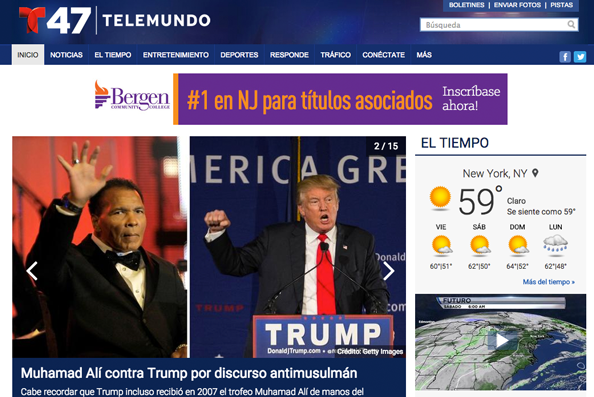 Telemundo’s local stations have begun rolling out a series of updates to their digital platforms.

The main change is a unified look across all of the station group’s 15 online properties’ desktop and mobile sites and station apps.

Telemundo is owned by NBCUniversal.

In addition to taking on a look and feel that’s more in line with NBC O&O stations, including a streamlined navigation menu and layout, the new sites also feature a new “Breaking News Bar.”

Other updates include new weather features:

The desktop and mobile changes are going live now, while the updates to the native apps will go live in early 2016.

The 15 Telemundo-owned stations’ apps will also launch a new app update in early 2016 to provide users with even more interactive mobile features to help them stay ahead of the news happening in their local communities. The roll-out of the new redesigned digital platforms are part of a series of enhancements made at all Telemundo-owned local stations to better serve Spanish-speaking viewers all across the United States and in Puerto Rico.

The changes are part of a groupwide investment that includes adding more than 160 new employees, including news reporters, producers and photographers and set updates at select stations and new graphics packages across all stations. Telemundo has also invested in new newsgathering vehicles and adding consumer investigative franchises.

NBC’s investments in Telemundo come as its parent company seeks to capitalize on the growing Hispanic market against Univision, which has faced increasing challenges since the 2013 launch of Fusion in partnership with ABC News.

Despite millions of dollars in investment from both partners, the channel has faced ratings struggles and staff restructuring, including layoffs.