CNN spices up segment on visas with virtual wizardry 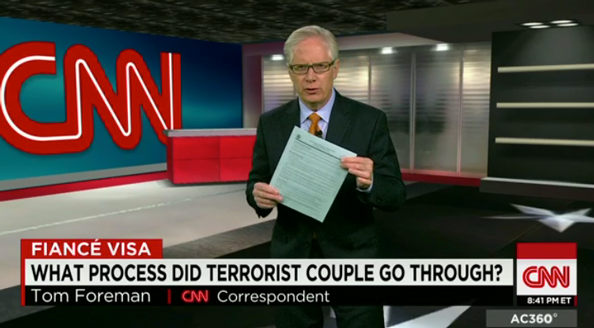 Visa applications. You can’t really get any drier than that. So, it makes sense that CNN decided to wheel out Tom Foreman and his box of green screen tricks to cover the topic on “Anderson Cooper 360.” Foreman, who regularly uses a green screen studio that places him inside a virtual environment, appeared in what appeared to be a faux version of the CNN Washington bureau studio, right down to the bright red anchor desk, glass doors and panels. The floor also featured star “decals” and the CNN logo was emblazoned on the wall behind him. Foreman started the segment by holding what appeared to be a real stack of papers, but then discarded them, presumably into a box or container painted green to match the chroma key wall. At the same time, a large, virtual version of the papers popped out from approximately where Foreman had tossed his real papers.

It’s a pretty old school trick — but came across halfway decent on air. The segment continued with on-screen bullet points and a photo that appeared to be on a panel behind Foreman and ended with him standing in front of a 3D bar chart tracking the number of so-called “fiance” visa applications. Overall, it wasn’t one of CNN’s most compelling uses of the virtual technology, but was at least better than having a report stand on a live shot and hold up a stack of paper that gets washed out by the studio lighting.