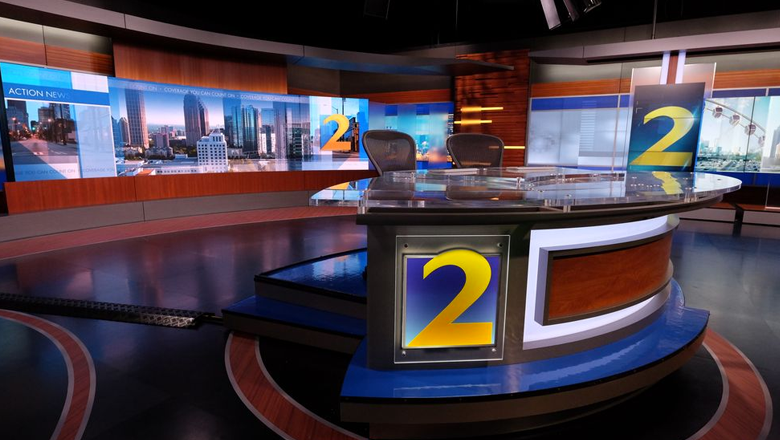 At the center of the new set, designed by Devlin Design Group, is a curved anchor desk fronted with an internally lit panel and wood toned band. On the left side, the station’s “2” logo is prominently displayed.

Behind this is a 20 foot wide curved and seamless LED panel that’s almost five feet tall and serves as the primary background behind the anchors. A nearby weather center is stocked with an array of 12 46-inch monitors and a 70 inch vertically mounted panel on a tower-like structure backed with frosted panels that separate the presentation area from workspace.

The weather center also features a repurposed touchscreen monitor that’s strategically positioned to be used by both weather and traffic reporters. A movable kiosk also allows the screen to be incorporated into other types of segments as well.

The station also repurposed a large touch screen monitor in this area for weather and traffic. We created a movable kiosk for this monitor so it can be used for other storytelling purposes.

Perhaps most impressive, however, is a “storytelling wall” near the anchor desk. Equipped with 6 46-inch monitors and 5 vertically mounted 55-inch panels all on movable mounts that allow the station to utilized it as a single large wall or break it up into smaller segments in a variety of unique combinations.

Yet another gadget featured on the set is a ceiling mounted track camera that allows for dynamic, sweeping views of the set.