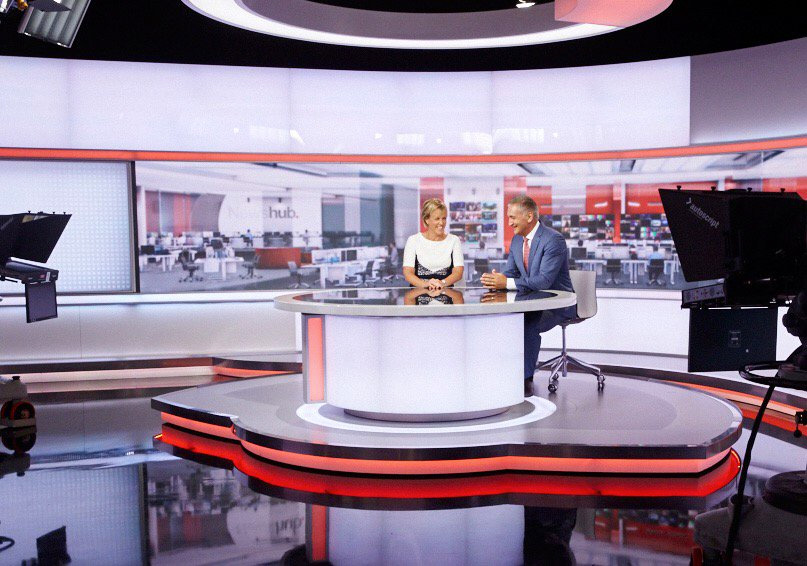 New Zealand’s TV3 unveiled a massive makeover for its news programs on Monday, part of a larger restructuring of its parent company, MediaWorks.

MediaWorks combined its digital, TV and radio properties into one “hub” for all news content. Dubbed Newshub, the combined efforts will provide breaking news and analysis through the various platforms around the clock, creating an integrated stream of media. “Newshub combines the power of our radio, TV and digital newsrooms and is focused on providing tailored content to all platforms,” said Mark Jennings, head of news at MediaWorks.

To carry out the hub concept on-air, MediaWorks updated its building in Auckland with a modernized newsroom and new Studio 1. The main studio, designed by Jago Design, includes the main news area and flexible current affairs area, along with standing positions and a weather wall.

“The main challenge was creating a space that could accommodate the numerous shows TV3 wanted to broadcast from the studio,” said Peter Aston, a senior designer at Jago Design and lead designer on the project. “Giving them all different identities while keeping the look unified and part of the overall TV3 brand. It was a move away from a studio with one main presentation space to a studio with several mini set areas.” The overall design style mixes color-changing backlit panels with metal in a sleek curved shape, adding some micropatterning of squares on the walls at camera height to add visual interest.

“TV3 wanted to create an environment that had the presenters at the heart of it, so that’s where we started. We wanted to give the main anchor area an authoritative and credible feel, while still remaining warm and intimate,” said Aston.

Behind the anchor desk, the set includes a 2.6mm LED display that curves with the wall to showcase stories or a newsroom background. “The news anchor desk is backed by a large curved LED screen that can give depth to the shots while also providing a canvas for the presenters and journalists to tell the story,” said Aston. “The use of curves was also important to the design, helping to create an environment that flowed from one area to another, keeping a visual link throughout the set.”

Similar to TV3’s previous home, the “hub” theme is carried forward by a large newsroom presence through the use of virtual set extensions that create the illusion of a much larger space.

On camera right, the weather area includes a 95″ monitor with a lightbox on either side adding more of the micropattern.

The stand-up area on the left of the main anchor desk includes a 3×3 55” Panasonic monitor wall with a small, removable presentation pod.

“The set had to be ultra-flexible and allow for several different presentation areas with different styles of presenting,” said Aston.

The current affairs area continues the curved design with similar styling to the main news set, creating a space that can house multiple programs over the course of a day. Flexible area of the set. Photo via Newshub

“The soft area of the set has a height adjustable desk and rostra [riser] that allows for different positioning. Coupled with lighting and graphic changes this provides each program with its own unique look. We also designed two separate standing positions that could be used in conjunction with flagship programs or be the basis for other shows in their own right. I think in the end there are seven shows plus weather broadcast from the studio.”

The main background in the area is comprised of four 95” screens with color-changing backlit panels.

To the right, the set connects with the main news set, sharing the 3×3 monitor array.

“With the brief’s emphasis on flexibility it was critical to design a solution that allowed for color and graphic changes,” said Aston. “Most surfaces of the set have some inbuilt lighting whether that be a lightbox or LED wash. With the different branding given for each show we are able to alter these elements along with graphics in screens to create individual identities to the set without the need for big scenery changes.”

The main Newshub bulletins use a color that is rarely seen on TV: almost a pink, but not quite a red.

“It’s not a color you see a lot, but that’s what made it fun to work with! The graphics provided to us had some great accent colors and textures, so it was just a case of picking the right areas to place the pink ensuring we get the right balance on screen.”