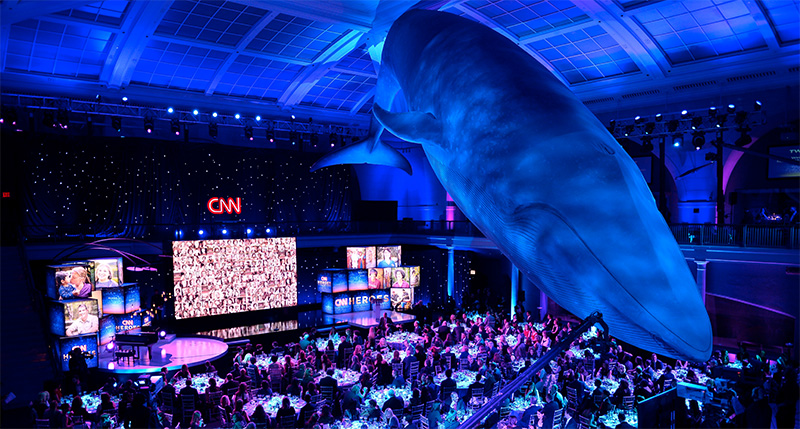 In November 2015, CNN once again held its all-star tribute, “CNN Heroes,” honoring everyday people who are changing the world.

The event, held at the America Museum of Natural History in New York City, featured a stage design from Clickspring Design.

The centerpiece of the design was a 256 square foot Christie MicroTiles wall, installed by Data Display Audio Visual, that served as a visual backdrop for photos, graphics and video.

“The main reason CNN used MicroTiles is that for the last awards show they used a 5-by-5 array of 60-inch LCD displays to create a video wall and apparently it was a big challenge to match things up properly so the installation was very tricky,” said Mark Swanson, technology director, Data Display.

“CNN developed the content and we created four walls 6 MicroTiles wide by 8 high, each with 1920 x 1080 content, and stitched them together to make one huge 12 foot by 21 foot wall to deliver the 4K content across the whole thing,” said Swanson. “CNN then sent us the signal from their production truck out in the street. The MicroTiles wall had so much more resolution than what CNN had before with the LCD panels.”

Swanson said he dialed back the brightness of the MicroTiles to make them compatible with the set lighting.

“They look great on camera. Their superb performance in high ambient light is an asset on set, so they aren’t washed out by (television studio) set lighting,” he added.

“We never intended to use MicroTiles for broadcast, but then we said, ‘Why not?’ and kind of fell into it. Their limitless resolution capability is a huge factor for on-camera, large-scale video backdrops because they are running everything at 1080p level. And MicroTiles’ shallow depth helps with space issues because they’re only taking up a foot or two of space on these sets,” said Rockefeller. “We have been involved with MicroTiles’ almost from their inception, so we have a lot of experience with them in a staging environment. We have more MicroTiles than any other stager and Mark has so much experience, he eats, drinks and breathes them.”