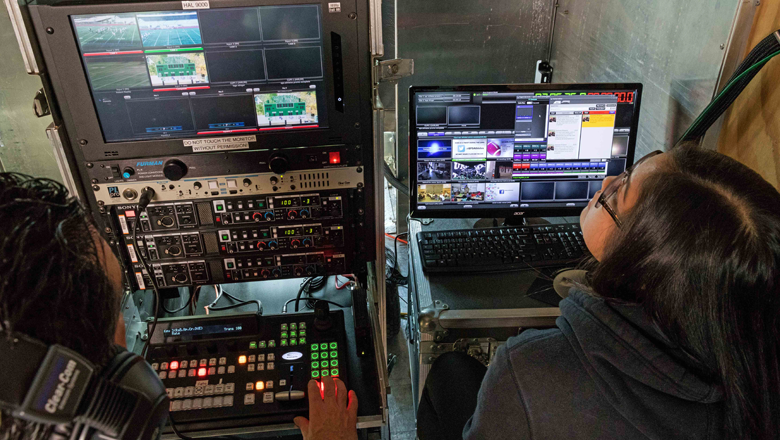 Installed in August, the switcher completes the transition to a full HD workflow that began with the purchase of a Mica 500 three years ago for the district’s mobile production unit.

The football games also feature a halftime “news” segment that promotes other district events. “While I take pride in all of our programming, I am especially proud of our EPS Sports coverage, which has taken great strides forward since I arrived in the district two years ago,” Griffin said in a statement.

“Changing the scores was just a real hassle,” Griffin explained. “We needed something where students who might have limited working knowledge of a graphics program could sit in front of it and learn it quickly.

Rapid CG improved our workflow and it also forced us to up our graphics presentation game. If we were going to take advantage of what it can do, we needed nicer graphics to go along with it. I love it.”

Based at the district’s Administrative Service Center in Vancouver, Wash., Evergreen’s studio had been using the mobile production unit to produce HD content until it received funding to purchase the new Mica.

For Griffin, the Mica’s dual PowerAux outputs were an important feature. He has big plans for the upgraded studio, including a program to showcase local musicians as well as an educational talk show to go with its current news program, YES-TV. One of the auxiliary outputs will be used to route video or graphics to a monitor on the set to enhance the on-air look of the programs. For added visual appeal, the upgraded studio will use Virtual Studios, Broadcast Pix’s high-end virtual set platform powered by ClearKey advanced chromakey technology.

In the control room, the Mica’s BPView customizable multi-view feeds a large monitor in the control room for the technical director, as well as a separate monitor dedicated to graphics and clip playback. Griffin is very pleased with the Mica switcher, and is looking forward to creating macros and exploring additional features. “It’s really robust,” he added. “We’re always learning new things it can do.”