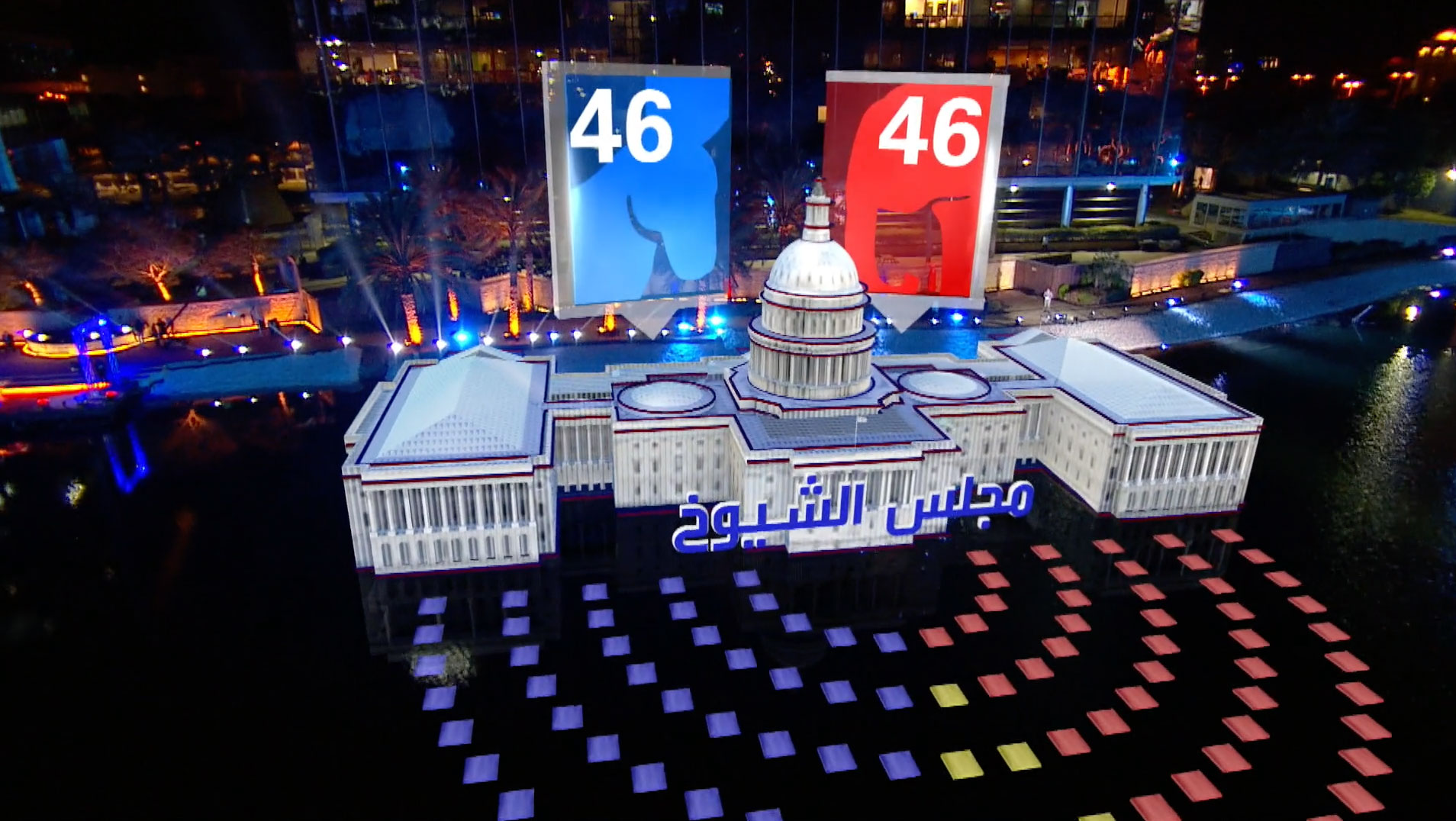 Al Arabiya used an impressive array of augmented reality graphics to tell the story of the 2016 U.S. Presidential Election, as we reported in our international round up.

With Vizrt to power the graphics and Spidercam for the camera mounts and tracking, the election results were virtually projected using a 9200 square meter map and 30-meter tall graphic outside the network’s facility in Dubai, marking the world’s largest augmented reality set in a live news production.

“During the past elections, we made use of immersive graphics with live data, but for the 2016 U.S. Elections, we thought bigger,” said Fadi Radi, the network’s head of graphics.

Part of the Middle East Broadcasting Channel group, Al Arabiya is one of the largest channels in the Arab region.

MBC’s designers worked in Viz Artist to design the election graphics as immersive objects. The sizing and positioning of the graphics had to be estimated, since the physical set-up would not be in place until four days before the election.

Spidercam, which typically installs their camera rigs in stadiums, had to work in a vastly different venue, a public location over a large lake. Lacking any natural structures around the lake to mount the winches to, temporary cranes on one side of the lake, and trusses mounted on the roof of the MBC building on the other side of the lake, were used to provide the anchor points for the system.

Vizrt, who has been a partner of the network for over ten years, had Viz Virtual Studio engineers on site to test the system ahead of the the election and work with Spidercam to calibrate and test the tracking systems.

“Al Arabiya has a track-record of thinking big, but this concept is on a completely different level”, said Ian Davies, Regional Manager of Vizrt Middle East. “When I first heard about the project, it was clear that it was going to be a visually stunning production, with Al Arabiya’s talented team of designers producing graphics for such a beautiful outdoor location, but I think the results surprised everyone by being even better than we had imagined”. The Vizrt system was comprised of a single Viz Engine to generate and display all of the live election graphics in real-time. Spidercam provided live tracking data that was processed with Vizrt’s Tracking Hub to accurately control the graphics during the live presentation.

“Given the high-profile nature of the event, it was critical that the right resources were provided to support Al Arabiya, so Vizrt supplied the latest and most powerful Viz Engine for the project, plus specialist technical resources to help ensure that everything went smoothly. I think the results speak for themselves. This was truly a world-class production that raised the standards for everyone,” said Davies.