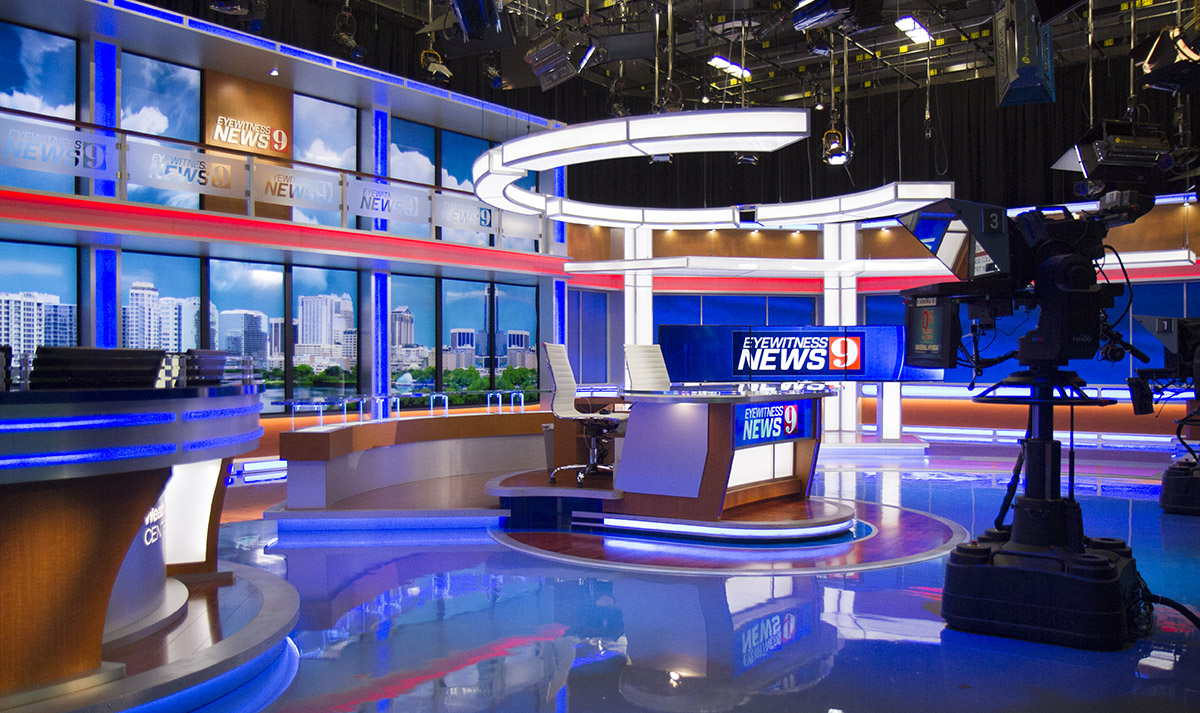 The Suncoast Regional Emmy Awards looks at work from Florida, Puerto Rico, Louisiana and parts of Alabama, handing out awards in categories from best newscast to promos and creative design.

WFTV’s winning set design was a collaboration between the team at Z Space Creative and WFTV.

“Everything we did with the design was wrapped around the concept of making it easier for us to tell the stories and for viewers to better understand the stories we were telling,” said Matt Parcell, WFTV’s ND. “Our expansive studio set offers almost endless versatility for our newscasts and incredible interactivity.”

The end-result successfully combines design directives for expansiveness, flexibility and technology-driven functionality, with the aesthetic goals of a sophisticated broadcast studio design merged with inspiration drawn from architectural influences.

Z Space’s designers and co-owners, Glenn Anderson and Anthony Ferguson, achieved the feeling of size and openness with a layout that utilizes the entire perimeter of the 80×50-foot studio space, and locates each of the presentation venues as far in front of the outer set walls as possible, for maximum depth of field.

“Our vision was to create performance islands within a large broadcast environment with great depth“ said Glenn Anderson, “with functional collaborative capability connecting these performance areas.”

The design has a dynamic on-air team feel, with the customary toss shots from the anchor desk to the weather desk. It also adds interactivity in the weather center: providing internal relationship shots to team meteorologists at their weather workstations, as well as an additional weather presentation position at a large monitor array wall comprised of nine 55” monitors. Hidden behind this array is an enclosed recording studio, with sliding glass doors providing views into the weather center. The weather area accommodates nine positions for meteorologists, and a position for Traffic/Social Media.

A focal point of the look is the anchor area backdrop – a large two-story faux window comprised of an array of thirteen 80-inch LCD monitors. Architectural, window-like framing and a faux balcony complete the look. This backdrop feature is mainly used for dynamic Orlando scenic views. But it also allows the background to be transformed for various looks – at different times of day for each show, or for breaking news or special reports such as election coverage or sports programming. The type of content can change also, with the option of using live video alone or mixing in graphical elements. Controlling the images is accomplished using a TVOne video Processor.
The impact and flexibility helps visually drive the stories to the viewers.

LED video curtains and RGB lighting enable the whole set to transform. The 50mm LED video curtains installed the set backgrounds, are used to display branded motion graphics, for example in the stand-up area and weather center. Approximately a half mile of RGB LED accent ribbon lighting is wired through various lightboxes and balcony facades to create color-changing opportunities.

“The RGB accent lighting, which is controlled via DMX on the light board, gives the station capability for multiple looks,” explains Anthony Ferguson, co-owner of Z Space Creative. “This approach” continues Ferguson “makes the set visually flexible. The directors can choose from many pre-programmed color combinations for breaking news or special events.”

In addition to the faux window monitor array in the anchor area and the large array in the weather area, video elements are used extensively throughout the set. The anchor desk features a unique video element of three Christie MicroTiles that form a video band along the front of the desk face. A distinctive presentation area features a triple monitor stand, with LCD monitors on swivel mounts, allowing screens to be positioned side-by-side in a landscape orientation creating a ribbon on a slight curve – or rotated to portrait orientation and spaced apart for a walk and talk type format.

“They made a complicated process simple for us, while they met and exceeded all our criteria right off the bat,” said Matt Parcell.

The design achieves WFTV’s goals, including the interaction of the anchors with the weather team, and the functionality created by the additional smaller studio outside the main studio, as well as the studio-within-the-studio that is mainly used for social media 24/7.

“We accomplished our mission: to add depth and detail to all the stories,” states Parcell. “The set design has made our newscasts better – not just because they look better – but the set has enhanced the quality of the journalism.” Viewers love the innovative look and especially the new interactivity of WFTV’s newscasts.