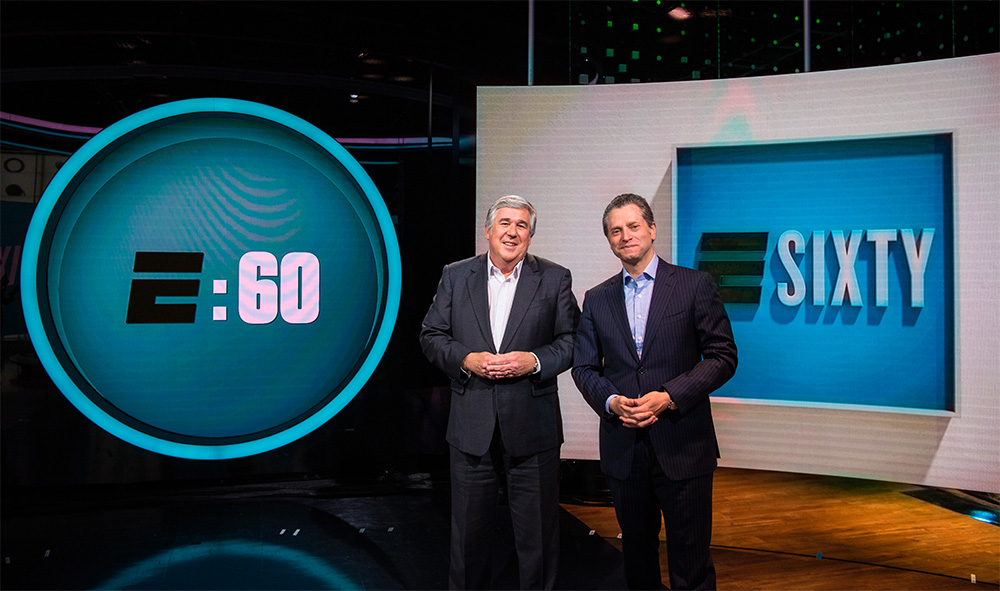 ESPN’s newsmagazine program, “E:60,” will debut a host of changes Sunday, May 14, with the launch of a new weekly Sunday morning edition. The updates will also mark the first time the program has aired live on a year-round basis from a standard timeslot.

“We could not be more thrilled to be moving to our new permanent time slot, 52 weeks a year,” said Andy Tennant, executive producer. “The decision to go weekly represents a doubling down on this kind of content. Maybe even a tripling down.”

With the update also comes a dedicated studio for hosts Jeremy Schaap and Bob Ley, along with an updated look, color palette and show theme music, as well as 3D animation and augmented reality graphics to help enhance the stories.

“In our new studio, with a new format, with some new reporters and producers, we continue to grow and evolve, and we can surround our storytelling like never before,” said Tennant. “Everyone involved with the show agrees that in this case more means more.”

“E:60” will utilize Studio Z in ESPN’s Digital Center 2, which is the smallest studio in the building at 2,250 square feet, with a new set from Clickspring Design. The studio space did not have a permanent show before this move, awaiting a full-time tenant after the launch of DC2 in May 2014.

ESPN notes the show format will allow “E:60” the opportunity to react to breaking news and shows will include a mix of profiles, investigations, interviews, global issues, stories that show why sports matter and quirky tales from off the beaten path.